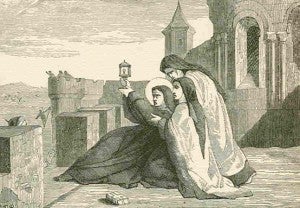 The moment the monastery’s chapel closed for the night, a group of nuns in brown habits quietly emerged from their cloistered choir loft and swarmed around their “special guest,” ready with their handkerchiefs and digital cameras.

Near the altar, inside an ornate, gleaming monstrance, was the relic of their monastic order’s founder, St. Clare of Assisi.

For the first time in 800 years, the relic—a fragment of the saint’s cranium—left its home at Basilica di Santa Chiara in Assisi, Italy, in line with the octocentennial celebration of the Order of St. Clare, also known as the Poor Clares.

Following its arrival at Ninoy Aquino International Airport on Tuesday, the relic was brought to Monasterio de Sta. Clara in Quezon City, where it was kept overnight before it was flown to Cebu.

That night at the monastery, the nuns silently savored a private moment with their Italian founder, reverently wiping the glass casing that contained the monstrance with their hankies, taking souvenir photos, whispering prayers. The relic’s exquisitely crafted vessel depicts the Virgin Mary surrounded by a host of angels.

Sister Ma. Amelia said the nuns had seen the relic during visits to their mother monastery in Rome, but the Poor Clares in the Philippines requested that the relic be brought to their 29 monasteries in the country for a more memorable celebration of the order’s 800th founding anniversary.

The relic’s Philippine tour was also timed with the 25th anniversary of the federation’s establishment in the country.

“One way to make the occasion more significant and for us to get into some connectedness with the saint is to bring the relic [here],” Sister Ma. Amelia told the Inquirer on Wednesday. She spoke to this reporter from behind a screen window in the monastery’s receiving area.

The relic’s two-month visit would give Filipino Catholics a chance to know more about St. Clare—best known to Filipinos as the go-to saint when one wishes for fair weather—especially at the onset of the 40-day Lenten season, the nun said.

St. Clare, who gave up her noble stature and embraced a life of poverty in the service of Christ, embodies the message of the holy season, she said.

“She was a person who was really in touch with the passion of Christ. Her focus is also on conversion and change of heart, which is the message of Lent,” Sister Ma. Amelia added.

That message calls on Filipinos to focus on the “person of Christ, especially because everything is just temporary and nothing in this world is permanent and could bring us eternal happiness and richness,” she added.

Many altar-bound couples traditionally troop to Monasterio de Sta. Clara on Katipunan Avenue, Quezon City, to pray for good weather on their wedding day through St. Clare’s intercession. Their prayers usually come with an offering of eggs wrapped in colorful cellophane.

Sister Ma. Amelia said eggs came to be associated with the saint because her name—also spelled as Ciara, Claire or Clara—means “clear.”

“So those who want to have clear skies, a clear mind or a clear conscience seek her intercession. It’s also because the egg white is clear,” she explained.

The practice of offering eggs dates back to the medieval times, she said.  When nobles made donations to monasteries, the monks preferred eggs because of their many uses: the yolk for food and the white for making a strong adhesive for stone buildings.

But unknown to many, St. Clare’s life was foretold as a source of “shining light” even before she was born in July 1194, according to the nun.

In an age when maternal and infant deaths were high (most women were married off in their early teens), St. Clare’s mother, Ortalana, fervently prayed to God for a safe delivery.

“Then she heard a voice telling her not to worry because the child she was going to give birth to will become a (source of) light. St. Clare indeed became a light to the world. Because of her, people were enlightened to do good, to give their life of service to the Church,” said Sister Ma. Amelia.

“Despite abuses in the Church and the many problems it faced in the early times, St. Clare didn’t doubt the Church … She professed loyalty to the Church.”

Clare was born to a wealthy Roman family who in the 12th century owned many properties, including a palace in Assisi and a castle on Monte Subasio in Perugia, Umbria, in Central Italy.  She grew up devoted to prayer and refused to be married off to a young and wealthy man at age 15.

At 18, she quietly left home to join an Italian friar who would be known in history as St. Francis of Assisi, founder of the Franciscan Order.

According to the Catholic Encyclopedia, Clare sought out St. Francis in secret and begged him to help her so she, too, “might live after the manner of the Holy Gospel.”  This was after the friar came to preach at the church of San Giorgio in Assisi during one Lenten season.

On the night of Palm Sunday, on March 20, 1212, she left home accompanied by an aunt and went to a chapel where, based on accounts, St. Francis and his followers shared a miraculous experience during a gathering: light beamed from their hands.

Upon reaching the chapel, she swapped her gilded dress for a rough brown tunic and a thick veil. St. Francis also cut off her hair as she made a pledge to serve Christ.

She later became an abbess of a female religious community that would include her sister, St. Agnes, and their mother. It was considered the second Franciscan Order to be established and became known as the Order of Poor Clares. It was renamed the Order of St. Clare by Pope Urban IV in 1263, 10 years after her death.

The Poor Clares came to the Philippines in the 17th century after a small community of Colettine nuns led by Mother Jeronima of the Assumption was authorized by the King of Spain and the Minister General of the Order to establish a monastery in the country.

Sister Ma. Amelia said the bone relic, a piece of Clare’s cranium, was a fitting symbol of the Italian saint’s reputation as “the brain” of the Church during her time.

At a time when men were generally in command, St. Clare fought for her ideals and wrote down her own “Rule” that focuses on poverty and simplicity, embodying the Rule of St. Francis.  “She was the first woman to write a rule for a religious order. All the rest just depended on the rule of men,” Sister Ma. Amelia said.

After visiting 29 monasteries and several cathedrals around the Philippines, the relic will return to Monasterio de Sta. Clara for public viewing on April 23. It leaves the country on April 30.

Ronald Factor, who hails from Nueva Ecija, was among the lucky devotees who saw the relic during its short stay in Quezon City. A few minutes before the chapel closed on Tuesday night, Factor kissed the relic’s glass casing while in deep prayer.

The 25-year-old man is set to enter the seminary in June.  “I asked for divine intervention and for her guidance. I prayed that if she will appear in my dreams tonight, I will become a Franciscan,” he said.

For Sister Florentina of the Daughters of Divine Zeal, whose convent is located near the monastery, being close to St. Clare’s relic made her feel more connected with Jesus.