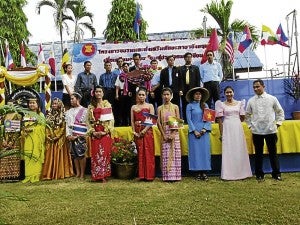 THE AUTHOR in Filipino dress (2nd from right) with Orly dela Cruz during an Asean Camp in Lankrabue, Khampeang Phet

PHITSANULOK, Thailand—It is not surprising to hear some older Thais speak a Tagalog word or two because there was a time quite a number of Thais went to the Philippines to study in universities. A popular band here, “Kalabaw,” has members who studied at Gregorio Araneta University in the 80’s.

Today it is also not surprising to hear some Filipinos speak Thai words. This is because quite a number of Filipinos are coming to Thailand to teach.

In the ‘70s a few Filipinos came to work with Bangkok-based international agencies or multinational firms, or as missionaries or entertainers. But starting around 2001, former Prime Minister Thaksin Shinawatra opened the country for teaching employment and a new kind of migration began. A number of those early migrant teachers were Filipino.

As of December 2010, according to the Commission on Filipino Overseas, there were at least 14,000 Filipinos in Thailand, 3,000 of them permanent migrants married to Thai citizens and about 11,000 temporary migrants with work permits.

More job opportunities may be opening up for qualified Filipino teachers as Thailand prepares for the full implementation of the Asean Community program by 2015. Some universities in Phitsanulok are going to offer Filipino as a subject starting this year.

Many of the early migrants came as tourists then stumbled on teaching jobs.

Michelle Santos, a graduate of management course went to Thailand in 2006 as a tourist then got recruited to teach.

As a comember of the Association of Southeast Asian Nations (Asean), Filipinos can stay up to 28 days in Thailand as tourists.

“It was easy to land a job here before,” she says, “if the school had a budget, the applicant would immediately be hired, no questions asked.”

Stephen Luri Mercado, a graduate of Xavier University with an MA in Special Education, traveled to Thailand in 2008 just to experience life in another country.

“It was my dream since I was 14 years old. I read about Thailand in National Geographic Magazine. I found a job and so I stayed.”

Leah Doysabas and Nancy Guigue Catane, both with masters degrees, tried their luck upon the prodding of friends who were already working in Thailand. Even with permanent teaching jobs in the Philippines, both packed their bags and headed for Thailand in 2003 and 2005, respectively.

Orly dela Cruz arrived on May 16, 2006. The following day he had a job. Genalyn Tolentino had a job already waiting for her in Chonburi through her friend, who applied for her. Paulo Masangcay, who had a masters degree in Literature from University of Sto. Tomas  came to Thailand on May 30, 2008, for interviews with two universities. By June 2nd, he was hired by Naresuan University in Phitsanulok, one of the top 10 universities in Thailand.

It wasn’t all easy going. Some Filipino teachers felt some Thai employers favored Caucasians over other Asians.

Leah recounts that when she first applied she received several “Sorry-we-don’t-hire-Filipinos” rejections. But she was eventually hired in 2004 at Chalermkwansatree School, the first Filipino to teach in one of the best government schools in Phitsanulok City.

Some also complained that salaries of Caucasians were much higher than those for Filipinos. 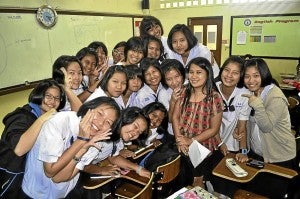 OVERSEAS TEACHER Leah Doysabas with her students at Chalermkwansatree School

Consul Edgar Badajos says he has heard such complaints but “this issue cannot be fully addressed by the embassy since this is between the employer and the employee.” But Badajos assured that the embassy is pushing a Bilateral Labor Agreement between the Philippine government and the Kingdom of Thailand to protect Filipino migrant teachers.

For most Filipinos, it is just a matter of patience and perseverance to look for better paying schools.

Orly said he had problems with his first school employer. But he was eventually hired by PTT (a Thai government-owned oil company) for deployment in school areas where oil fields and refineries are operating. He and seven Filipinos, including Stephen Mercado, are deployed in the provinces of Khampeang Phet, Sukhothai and Pitsanulok.

“We do not feel discriminated here. All of us in PTT-Rajhabhat are Filipinos,” he states.

Tutorials are a profitable part time job in Thailand. After teaching four to six hours at a school, many teachers either go to tutorial centers or accept tutorials at home.

For Troy Mina, who came to Thailand in 2008, tutorials are not just a part-time job but a profitable full-time business.

“My neighbors asked me to teach their children. I started with four students, after a month it grew to 10 students. I taught them in my apartment. But then, students kept coming so my Thai friends and I looked for a more spacious place to convert into a formal classroom setting,” he retells.

Most employers assist foreign teachers secure working visas. They can also get visas for their dependents or family members.

However, because many Filipino teachers did not go through the processing at the POEA (Philippine Overseas Employment Administration), they encountered some problems regarding their legality as “OFWs” and their benefits. Earlier, this was not a problem because of the presence of an OWWA (Overseas Workers Welfare Administration) office in Bangkok. But this office has since closed.

The embassy says it is working on the return of the OWWA office.

Adapting to the Thai way

Hard work, good work ethics, determination and willingness to adapt are characteristics that impressed many Thai school directors. Thus, it is not surprising that in Ajarn.com (the site for teaching jobs), many schools are now looking specifically for Filipino teachers.

In spite of some problems, many Filipino migrant workers here choose to stay in Thailand. Aside from the convenience, competitive salary, and cheap commodities and luxuries, safety is another reason Filipinos are willing to take on assignments even in far-flung municipalities.

“I intend to stay until I and my family are secured in the future. So far, I haven’t seen a better opportunity in our country,” claims Troy.

By 2015, the Asean Community program is set for full implementation and Phitsanulok will be the country’s first center.  Thailand has been preparing for this since 2010, initiating various projects among Thai students.

In its website it states: “It will be necessary to accelerate the capacity building of Thai students in terms of knowledge and skills as well as in English and other neighboring language proficiencies and technology. The aforementioned projects consist of the following areas: the Spirit of Asean, Asean studies curriculum, and educational personnel development in the English language, and quality development of private vocational schools.”

As part of the preparation, they are holding so-called Asean Camps to discuss the integration of Asean studies in the curriculum, including courses on Asean languages and the histories of neighboring countries.

In the province of Phitsanulok, the third largest region in Thailand, all schools have been conducting Asean Camps since January showcasing the cultures and traditions of the member-countries. At Naresuan University, there is a Filipiniana section in the university library, and Filipino will be taught as a subject starting March.

Phitsanulok Pittayakom, a government school has established an Asean  Resource Center since 2009 where Filipino, Burmese and Vietnamese Studies are being taught.

According to Badajos, a Bilateral Labor Agreement with Thailand is part of the Philippine preparation for the Asean Community as well as the K Plus 12 Education program, which will put the Philippines in step with its neighbors.