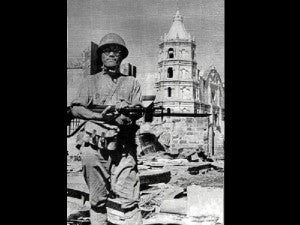 MOST DAMAGED CITY Manila was among the world’s most heavily bombarded cities during World War II. INQUIRER file photo

(Editors Note: The author, a retired officer of the Bangko Sentral ng Pilipinas, is the youngest son of the late Chief Justice Ramon Q. Avanceña, who served during the American and Commonwealth eras.)

American and Filipino soldiers who participated in the liberation of Manila, which took place from Feb. 3 to March 3, 1945, told civilian survivors it took them three days to cross the intersection of Padre Faura Street and Taft Avenue, advancing toward Paco Cemetery.

The automatic weapons fire that raked the American lines from heavily defended buildings of the hospital and the University of the Philippines forced them to call for armor assistance in spite of the heavy artillery carpet barrages that the area was subjected to for one week.

My school, Ateneo de Manila on Padre Faura, was closed and taken over by the Japanese Imperial Army as it was considered American, and therefore, enemy property. The Japanese, however, allowed some schools, like De La Salle College on Taft Avenue, to reopen. It was then that my odyssey as an Atenean at De La Salle College began.

Despite the “blue invasion,” the La Salle Brothers and La Sallites were kind to us Ateneans and treated us well.

After De La Salle suspended classes indefinitely, our family moved to Baguio City in early October 1944, returning only to PGH—where my father was confined—the following year.

Before they closed the school, the La Salle Brothers, acting with incredible courage and concern for the safety of the students under their care, decided to escort each of us home.

We were divided into groups, each made up of boys living in one district of Manila. I belonged to the Pasay group of about 50 students. During the battle, all the Brothers were mercilessly killed by the Japanese.

The battle caught us inside PGH.

From the balcony of our suite, we watched the arching trajectory of artillery shells coming from somewhere in Sampaloc, tracing white lines against the black night sky and crashing around Port Area. The crackle of machine gun and rifle fire filled the air as fighting raged.

By Feb. 10, the US Army had set up its 105-millimeter batteries in Grace Park. There must have been other artillery batteries from the east as we heard the whine of shells flying over PGH in the direction of Dewey (now Roxas) Boulevard, where the Japanese had set up heavy naval guns facing Manila Bay. Soon enough, the first shells crashed on PGH.

We had not imagined the Americans would shell the hospital, which was full of thousands of patients, hospital staff and refugees from Malate, Paco and Singalong who were told by the Japanese to stay indoors or be killed. Our agony at PGH had begun.

During that week, which never seemed to end, artillery barrages came crashing down on us in carpet-bombing fashion: first PGH, then the Bureau of Science, St. Paul College, Assumption College and later, Ateneo de Manila and the University of the Philippines across Padre Faura and back to PGH.

Some shells seemed to have a delayed action fuse as these would shake the building first and explode a minute later, causing chaos. Patients and nurses were given the priority to sleep on the floor. The rest had to squat, remain standing or lean against the wall, sometimes for days. The doctors operated on the wounded without anesthesia, lights and water.

We later found out why the Americans where shelling PGH.

During the lulls, a piper cub would fly low over the hospital complex observing the accuracy and effect of the artillery barrage. No sooner would the plane fly overhead than Japanese soldiers would crisscross the grounds, firing at the aircraft. This only drew fire from the Americans.

We realized then why the Japanese had forced the people to hide inside—to make the Americans think that only Japanese soldiers were occupying the hospital and thus provoke the Americans into bombing it.

The artillery barrages started at 7 or 8 a.m., breaking off at lunch, then resuming in the afternoon. B-25 Mitchell bombers were now flying sorties at tree-top level strafing Japanese positions around PGH. Then P-51 Mustang fighter planes began showing up.

As the fighting raged closer to the hospital, rumors spread that a massacre inside the PGH compound was imminent.

Father Cabonce, the hospital’s courageous Jesuit chaplain, braved the shelling to administer to the wounded, and led the prayers ward by ward. He blessed the people and gave us general absolution. His courage and dedication to his ministry was one of the many inspiring acts of heroism during those agonizing days.

We were eventually transferred to the basement after Japanese soldiers lobbed smoke grenades inside our wards. It was difficult to sleep at night as we could hear soldiers roaming around looking for women.

Lamps were doused as soon as the sound of hobnailed boots could be heard approaching. Some soldiers wore split-toe black rubber shoes so they could tiptoe around undetected, pounce on a girl and drag her out into the night.

The morning of Feb. 17 dawned on us brightly. We braced ourselves for the morning artillery barrage. The rapid staccato of “woodpecker” machine guns could be heard, backdropped by the rattle of musketry with occasional loud “whoomps” from bazookas or mortars.

We were resigned to the thought that we would die before the Americans arrived. There was almost no food and water for the thousands trapped inside the hospital.

A heavy barrage suddenly came crashing down on us, preceded by the all-too-familiar distant booming of cannons. Count six seconds and the shell would either hit you or fly overhead. By midmorning, the barrages came in quick succession. Machine-gun fire from both sides suddenly opened up in a deafening duel.

Heavy fire peppered the building with bullets without letup. There was a crash of exploding shells against concrete and the sound of ricocheting shrapnel and bullets. We were crouched under the elevator, but showers of sparks from exploding shells and shrapnel so terrified us that prayers asking God to save us filled the basement.

Then, as if by magic, all noise stopped. We heard the stomping of boots on the concrete floor over our heads as Japanese machine gunners set up weapons right on top of us. As they fired, responding heavy machine guns sent them scurrying to the back of the PGH compound.

After a deafening silence, we heard someone shout—then sing—“God Bless America” as approaching US soldiers were mobbed, embraced and kissed.

A stone’s throw away, Japanese soldiers were running back to PGH towards the Bureau of Science. We were still in a daze when we were led out to the front driveway. There, we saw a line of Sherman tanks facing the administration offices still in position before they delivered the point-blank barrage that preceded the assault on the hospital buildings.

There was a long line of ambulances, weapon carriers and trucks ready to evacuate the patients and hospital staff, supervised by fully armed, steel-helmeted American soldiers, while machine-gun fire continued to assault the UP complex.

PGH was liberated by elements of the 37th “Buckeye” Division of the American Army of liberation on Feb. 17 commandeered by Lt. Gen. Walter Krueger. Arrayed against them were crack units of the Japanese Imperial Marines under Vice Admiral Ranji Iwabuchi.

On the Feast of the Assumption of Our Lady on Aug. 15, Japan finally surrendered, and fighting in the Pacific War arena came to an end. The formal surrender took place on Sept. 2, when USS Missouri anchored on Tokyo Bay.

Battles have their heroes, sung and unsung. For many, their acts of bravery and heroism are known only to God. May they all rest in peace in the embrace of the Lord.