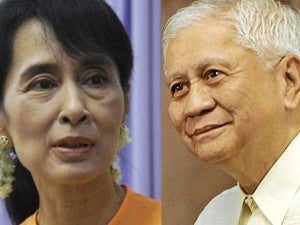 During a Feb. 9 meeting with Suu Kyi at her Rangoon residence, Del Rosario “expressed his sincere wish” the opposition leader would win in Burma’s (Myanmar) parliamentary by-elections scheduled for April 1.

They “held a brief exchange of views” about the coming elections, as well as on “political and socioeconomic reforms and the rule of law” in the Southeast Asian country, said Department of Foreign Affairs spokesperson Raul Hernandez.

In a text message, Del Rosario said that he and Suu Kyi “discussed reforms towards democracy and national reconciliation and the need for sustainability.”

“We also declared our support for the lifting of sanctions against Burma and offered our proposal to develop Philippine-Burmese parliamentary friendship,” the DFA head told the Inquirer.

Suu Kyi, who is representing the constituency of Kawhmu, has begun campaigning for a seat in the Burmese parliament, said a BBC report.

Suu Kyi was released from house arrest shortly after the parliamentary polls in 2010.

Her party won a landslide victory during the 1990 elections but was not allowed by the ruling military junta to take power.

Del Rosario described as “significant” his trip to Rangoon, noting that it was “taking place when Burma is at its crossroads of history.”

The secretary congratulated his hosts for the “political, economic and social reforms they have undertaken.”

For his part, Thein Sein urged the Philippine business community to “invest in various sectors of the Burmese economy, such as oil and gas, agriculture, mining, forestry and timber products, development of deep sea ports, and infrastructure,” among others.

The two countries’ Joint Commission for Bilateral Cooperation is scheduled to meet in Manila in early June.

During his official trip to Burma’s capital, Del Rosario also met with about 100 of the 362-strong Filipino community in the country.

Del Rosario “emphasized the positive role of the Filipino community at this particular time in the country’s history when socioeconomic development and reforms are underway.”

At the same time, he cited the Filipino community’s “support for the victims of natural disasters in the Philippines,” said Hernandez.

Del Rosario also pledged to “work on the OFW remittance system, as well as air service links which will benefit both countries,” he added.

Aside from professionals working for United Nations-attached agencies,   Filipino workers in Burma also include teachers, engineers, architects, entertainers, and spouses of Burmese nationals.