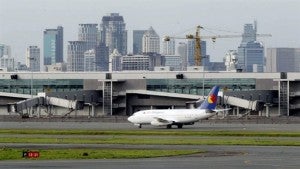 MANILA, Philippines—The German Embassy in Manila called for a Filipino-German builder to negotiate a settlement to end a festering legal dispute over the capital’s expropriated main airport terminal.

The mission said the six-year-old dispute could drag on for years more, preventing the full use of the much-needed Ninoy Aquino International Airport Terminal 3 as two other Manila passenger terminals age and fill up beyond capacity.

“We… reiterate that a negotiated settlement between all parties involved would be the best way out of the present impasse,” the embassy said in a statement.

A swift settlement would also encourage the international business community to invest in the Philippines which is trying to attract private capital to fund much-needed infrastructure, it added.

The Pasay City Regional Trial Court on Tuesday ordered the Philippine government to pay $176 million in compensation for seizing the terminal in 2004. The ruling rejected its Filipino-German builders’ demand for $846.43M compensation.

Fraport has also separately submitted the case to the International Centre for Settlement of Investment Disputes in Washington.

These moves may just prolong the legal dispute and prevent contractors from completing and renovating the terminal, the German embassy warned.

Then-president Gloria Macapagal-Arroyo declared the contract PIATCO had signed in 1997 with the previous government of Joseph Estrada illegal and had the project expropriated in December 2004.

Arroyo’s government said there had been many breaches of contract, including the use of substandard materials and failure to conform to safety standards.

It unleashed a prolonged legal battle that caused many delays in the completion of the terminal, originally built to serve 13 million passengers per year.

It opened for limited use by three local budget carriers in July 2008 but foreign carriers still use a crumbling 29-year-old terminal that was built to serve 4.9 million passengers per year.