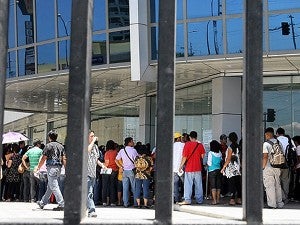 Good news for those who want to renew or get a Philippine passport for the first time.

There will be a freeze on passport processing fees this year, according to the Department of Foreign Affairs (DFA).

DFA spokesperson Raul Hernandez on Tuesday said “there are no formal moves to increase passport costs.”

The agency’s Office of Consular Affairs (OCA) is “not planning any increase in passport processing fees this year,” Hernandez told the Philippine Daily Inquirer.

Regular passport processing, which is pegged at P950 (about $22), can be claimed after 14 working days. “Express,” or expedited, processing in seven days costs P1,200.

The DFA used to charge P500 and P750, respectively, for the issuance of passports. The fees were raised in 2009 following the introduction of  “e-passports.”

In the past two years, the DFA issued at least five million passports, generating more than P6 billion for the government.

This year, the DFA expects to process 2.8 million passports, about 200,000 more than the travel documents it issued in 2011.

In its 2011 accomplishment report, the DFA noted that “the releasing time of passports has been shortened from 31 days to 14 days for regular processing.”

It said “the appointment waiting time for passports has been reduced from 75 days to seven days.”

The DFA has repeatedly reminded passport applicants to schedule an appointment with the OCA to ensure that their applications will be accommodated.

The appointment system “will enable the OCA to preprocess information submitted in advance by a passport applicant, thus avoiding long queues as experienced by walk-in applicants,” the DFA explained.

According to the DFA, passport applicants may set an appointment by going online (www.passport.com.ph), or by calling 737-1000.

The fee of $22  for the regular processing of a passport goes up to $60 at Philippine diplomatic missions abroad.

It is higher because of “transport and logistics costs plus the higher rates for personnel services and utilities in our foreign missions,” said the DFA’s Public Information Service Unit (Pisu).

But Pisu pointed out that the Philippine processing fee was “one of the lowest in Asia, if not the world.”

The Philippine passport also costs much less than counterparts in the United States ($110) and Canada ($86).

“With this move, the DFA was taking a big leap forward as it can now more effectively deliver consular services to the people in modern, more applicant-friendly settings at very little cost to the government,” Foreign Secretary Albert del Rosario said

“Since the last quarter of 2011, the combined public-private partnership arrangements we have entered into with the private sector on this initiative translates to almost P1.04 billion in savings for the government over a period of 10 years,” he  added.

The DFA is scheduled to inaugurate next month the new offices of DFA-Cebu at Pacific Mall in Mandaue City, according to Hernandez.

“We have actually already transferred there, but operations are not yet in full blast. We are set to open in several other locations nationwide in April and more in June,” he said.