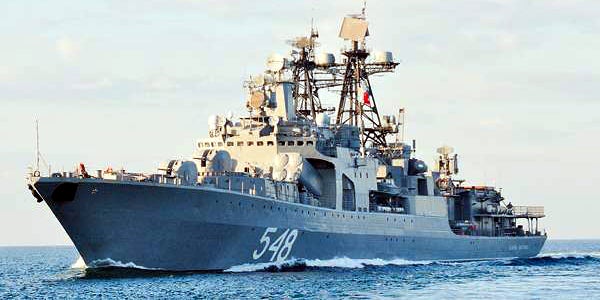 THE RUSSIANS ARE HERE The Russian Navy antisubmarine ship, Admiral Pantaleev, with the rescue tugboat, Fotly Krylov, and the large sea tanker, Boris Butoma, sails into Manila Bay on Tuesday for a goodwill visit. ARNOLD ALMACEN

Only Admiral Panteleyev docked at the South Harbor, while the two other ships, “Boris Botuma,” a large sea tanker, and “Fotiy Krylov,” a rescue tug, stayed at the anchorage upon entering Manila Bay at about 6 a.m., said the Philippine Navy spokesperson, Lieutenant Colonel Omar Tonsay.

“The visit hopes to strengthen existing friendly relations between the two navies through a series of scheduled events aimed at enhancing understanding and cooperation,” he said in a statement.

He added that the visit would “promote a joint environment aimed at strengthening response measures against terrorism, piracy, and transnational crime.”

In a phone interview, Tonsay quickly deflected suggestions that the Russians’ visit might have any connection to tensions over disputed territories in the West Philippine Sea (or South China Sea) claimed by countries including the Philippines and Russia’s next door neighbor China.

“We have an existing memorandum of agreement between the Department of National Defense and the Ministry of Defense of the Russian Federation on the exchange of defense and military delegations dated December 2009,” he said.

Read Next
DFA: Faster release of passports; no fee hike
EDITORS' PICK
A laptop that maximizes your WiFi so you can maximize your productivity
House energy committee chair Arroyo bats for cheap electricity
In Borongan, nuns play hoops (not mahjong)
PH resumes talks with China on Chinese-funded transport projects
Why Tagle is a leading papal contender
Powered by style, innovation and passion
MOST READ
Why Tagle is a leading papal contender
Arjo Atayde reveals proposal to Maine Mendoza was ‘more than a year’ in the making
Iza Calzado asked self upon learning she’s pregnant at 40: ‘Is this what I want?’
SRA officials should resign after ‘illegal sugar order’ – Zubiri
Don't miss out on the latest news and information.