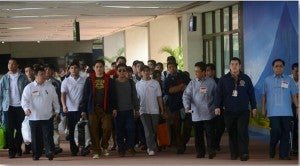 “You are men and women of courage, heroism and dedication,” said Del Rosario of the 296 Filipino crewmembers of the luxury liner that ran aground off Italy’s Tuscan coast last week. “We commend you for showing to the world the best traits of the Filipino seafarers.”

Unlike the Italian captain who abandoned his crippled vessel, the Filipinos and other crewmembers stayed to help evacuate the panicked passengers.

“The Philippine Embassy in Rome received important feedback from other crew members as well as passengers of your brave acts manifesting competence, professionalism and humanity, even under extreme pressure,” said Del Rosario.

“In the words of President Benigno S. Aquino III, you are our ‘sailing ambassadors’,” he told the Filipino crewmembers who have arrived in Manila in three batches since Thursday.

The 17-deck liner crashed into rocks off Giglio on the night of January 13 with 4,229 passengers and crew from 60 countries on board and began to keel over just as passengers were settling down for supper at the start of their cruise.

Eleven people have been confirmed dead in the tragedy so far including four French nationals, one Italian and a Spaniard among the passengers and two crew members — a Peruvian waiter and a Hungarian violinist.

Three of the bodies recovered have not yet been identified.

Relatives of the 21 people still missing have travelled to Giglio and towns on the Italian mainland, clinging to the hope that their loved ones survived.

Del Rosario expressed relief all the Filipino crew are safe.

“We assure you of the government’s continued support and assistance, as you join your families, recover from your recent sad experience, and return to work at the earliest opportunity,” he said.

“The DFA recognizes and appreciates all the assistance provided to you by our Embassy in Rome, the Filipino community in Italy, the local residents of Giglio Island, and the relevant Italian authorities.”  With Agence France-Presse