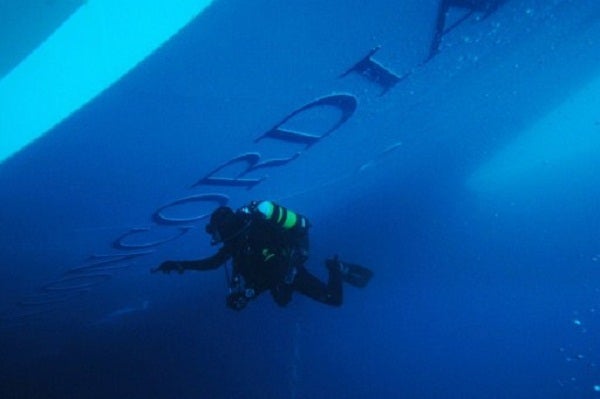 GIGLIO ISLAND—Relatives of those still missing from a stricken Italian cruise ship laid flowers on the sea by the wreck on Friday, a week after the tragedy in which up to 32 people are feared dead.

And as more stories of bravery emerged from the disaster, the ship’s chaplain said captain Francesco Schettino — since reviled as an incompetent coward — had cried in his arms once on shore.

Rescue workers meanwhile resumed operations on that part of giant 17-deck Costa Concordia still above water. Operations had been suspended earlier Friday when the ship began slipping off a rocky ledge into the open sea.

“The ship has stabilized and the search on the upper part of the vessel is resuming,” Alessandro Busonero, a spokesman for the Italian navy, told Agence France-Presse at the scene as rescuers set off for the vessel from Giglio’s tiny harbor.

High waves in the Mediterranean had heightened fears that the 114,500-ton ship, which is lying half-submerged on its side off the Tuscan island of Giglio, could sink completely, its tanks still full with 2,380 tons of fuel.

Eleven people have been confirmed dead in the tragedy so far including four French nationals, one Italian and a Spaniard among the passengers and two crew members — a Peruvian waiter and a Hungarian violinist.

Three of the bodies recovered have not yet been identified.

Relatives of the 21 people still missing have travelled to Giglio and towns on the Italian mainland, clinging to the hope that their loved ones survived.

The mother, father and sister of a missing Peruvian waitress and the brother of an Indian waiter took a coastguard vessel out to the wreck and laid white and yellow flowers in the sea next to the shipwreck.

The mother of missing five-year-old Dayana Arlotti was also on the island, along with the relatives of a young French couple lost at sea.

“We hope there could still be people alive inside… If the search goes on, it means we still have hope,” said Cosimo Nicastro, a coast guard spokesman.

The search would focus on the third deck of the ship where the doomed luxury liner’s lifeboats were, he said.

Rescuers on Friday also sent down a small remote-controlled robot to determined whether the ship could be attached to its resting place.

The liner crashed into rocks off Giglio on the night of January 13 with 4,229 people from 60 countries on board and began to keel over just as passengers were settling down for supper at the start of their cruise.  Of its more than 1,000 crewmembers, 296 were Filipinos.

Giovanni Lazzarini, 30, an entertainer on the ship, said he had dressed up as Spiderman, Mister Incredible and even Wonder Woman to entertain eight children in a theater.

“I put on the costumes to try to ease the fears of the children” after the ship crashed, he told the Corriere della Sera newspaper.

And Catholic chaplain Raffaele Malena told French magazine Famille Chretienne told how he had helped a child who was being trampled in the stampede to evacuate the boat.

He had even taken time to God in the ship’s chapel, he added, saying: “I’m asking you for nothing short of a miracle!”

He spoke too of his emotional reunion onshore with Schettino, the captain.

“At around 2:30 a.m. I spoke to the captain. He embraced me and cried like a baby for about a quarter of an hour.”

Schettino, who is being investigated for multiple manslaughter, abandoning ship and causing a shipwreck, is currently under house arrest at his home on the Amalfi coast but has said he will appeal against the restriction.

He has denied Italian newspaper reports that he was joined on the bridge at one point by Domnica Cemortan, a 25-year-old Moldovan ballerina.

From Moldova, Cemortan told AFP she would be happy to provide testimony if required.

Fresh amateur video footage came to light Friday, one showing a crew member misleading dozens of frightened passengers wearing life jackets by saying there was no alarm and they should return to their cabins.

A second video from an inhabitant of Giglio shows the Costa Concordia sailing very close to the island on an earlier voyage. Lloyd’s List in London said the ship had actually sailed nearer the island than when it crashed.

Dutch company Smit Salvage meanwhile said it was ready to pump out the fuel in what is known as a “hot-tapping” operation, but officials say that would require suspending the search on the ship.

Experts say the luxury ship is slipping off a rocky sea shelf at a rate of around one centimeter (0.4 inches) every hour towards the open sea.

Earth sciences professor Nicola Casagli said from the island the ship was lying on two rocks — one under the bow and one under the stern — but the middle part was suspended underwater.

“Measurements taken during the night show a progressive slow movement,” he added.

The head of the vessel’s owner, Costa Crociere, said in an interview that the company had been warned too late of the scale of the disaster.

Pier Luigi Foschi told Corriere della Sera that the first call from Schettino to Costa came at 10:05 p.m. (2105 GMT) — almost half an hour after the ship hit rocks that are well known to local inhabitants.

The announcement to evacuate the ship came 68 minutes after that call.

“This hour and more of delay is not normal. It’s unjustified,” Foschi said, adding: “I can’t sleep at night…. If the ship had been abandoned earlier we wouldn’t have lost human lives.”

“Personally I think (Schettino) wasn’t honest with us,” he said.

“I think he was in an emotionally altered state. He was watching his creature, his ship, sinking in front of him.”

Foschi added: “Something like this will never happen again. Never again.”

Schettino’s lawyer Bruno Leporatti, however, emphasized that the captain had “alerted the company immediately of the problem on board.”