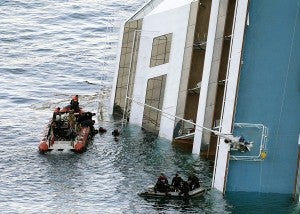 ROME—Italian rescue workers suspended operations Wednesday after a stricken cruise ship shifted slightly on the rocks near the Tuscan coast, creating deep concerns about the safety of divers and firefighters searching for the 22 people still missing.

The $450 million Costa Concordia cruise ship had more than 4,200 passengers and crew on board when it slammed into the reef Friday off the tiny Italian island of Giglio after the captain made an unauthorized maneuver.

The bodies of five adult passengers — four men and one woman, all wearing lifejackets — were discovered in the wreckage Tuesday, raising the death toll to 11. Their nationalities were not immediately released.

Instruments attached to the ship detected the movements early Wednesday, forcing the search to be suspended even though firefighters who spent the night searching the area above water could not detect the movement. No additional passengers or crew were found.

“As a precautionary measure, we stopped the operations this morning, in order to verify the data we retrieved from our detectors, and understand if there actually was a movement, and if there has been one, how big this was,” said Coast Guard Cmdr. Filippo Marini.

Officials said they hope the data from the instruments will reassure them that the ship has resettled, allowing the search to resume. The latest victims were discovered after navy divers exploded holes in the hull of the ship to allow easier access.

In addition to the rescue, much of the focus has been on the cruise ship captain’s actions during and after the grounding.

In a dramatic phone conversation released Tuesday, a coast guard official was heard ordering the captain, who had abandoned the ship with his first officers, back on board to oversee the evacuation. But Capt. Francesco Schettino resisted the order, saying it was too dark and the ship was tipping dangerously.

“You go on board! Is that clear? Do you hear me?” the Coast Guard officer shouted as the captain of the grounded Costa Concordia sat safe in a life raft and frantic passengers struggled to escape after the ship rammed into a reef off the Tuscan coast.

“It is an order. Don’t make any more excuses. You have declared ‘Abandon ship.’ Now I am in charge.”

Jailed since the accident, Schettino appeared Tuesday before a judge in Grosseto, where he was questioned for three hours. The judge ordered him held under house arrest, his lawyer told reporters, and Italian media said he had returned to his home near Naples.

Criminal charges including manslaughter and abandoning ship are expected to be filed by prosecutors in coming days. He faces 12 years in prison for the abandoning ship charge alone.

Schettino has insisted that he stayed aboard until the ship was evacuated. However, the recording of his conversation with Italian Coast Guard Capt. Gregorio De Falco makes clear he fled before all passengers were off — and then defied De Falco’s repeated orders to go back.

“Listen Schettino,” De Falco can be heard shouting in the audio tape. “There are people trapped on board. … You go on board and then you will tell me how many people there are. Is that clear?”

But Schettino resisted, saying the ship was listing and he was with his second-in-command in the lifeboat.

“What are you coordinating there? Go on board! Coordinate the rescue from aboard the ship. Are you refusing?” came the response.

Schettino said he was not refusing, but he still did not return to the ship, saying at one point: “Do you realize it is dark and here we can’t see anything?”

De Falco shouted back: “And so what? You want to go home, Schettino? It is dark and you want to go home? Get on that prow of the boat using the pilot ladder and tell me what can be done, how many people there are and what their needs are. Now!”

The exchange also indicates that Schettino did not know anyone had died, with De Falco telling him at one point: “There are already bodies now, Schettino.”

“How many bodies?” Schettino asks in a nervous tone.

“You are the one who has to tell me how many there are!” De Falco barks in response.

Schettino was finally heard on the tape agreeing to reboard. But the coast guard has said he never went back, and police arrested him on land several hours later.

Italian authorities say 24 passengers and four crew members are missing, including the five bodies found Tuesday. They include two Americans, 13 Germans, six Italians, four French, a Hungarian, an Indian and a Peruvian.

All 296 Filipino crewmembers are safe and will soon be repatriated, the Department of Foreign Affairs said in Manila on Monday.

Meanwhile, a Dutch company also said it would be ready to begin operations to pump fuel from the ship to avert a potential environmental disaster. Fire department spokesman Luca Cari said once the all clear is given, the plan is to both resume the search and begin work on pumping the fuel out in tandem.