How to save P1.9-B down payment in shelved Russian chopper deal? | Global News

How to save P1.9-B down payment in shelved Russian chopper deal? 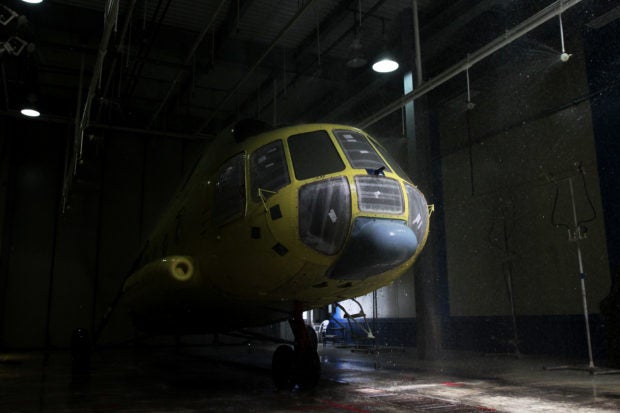 An Mi-17 helicopter is seen during the leak test at Kazan Helicopter Plant, a subsidiary of Russian Helicopters, in Kazan, Russia, on Aug. 24, 2020. (REUTERS FILE PHOTO)

MANILA, Philippines — The Department of National Defense (DND) is considering getting some of the Mi-17 transport helicopters already manufactured in Russia in exchange for the P1.9-billion advance payment in the P12.7-billion chopper deal that was canceled near the end of the Duterte administration.

Speaking to senators on Tuesday, Erik Lawrence Dy, the DND chief for legal and legislative affairs, said it was one of the options floated during internal discussions on the matter. But he clarified that DND officials had yet to formally meet with Russian counterparts to discuss the withdrawal of the P12.7-billion contract.

“We are currently negotiating (for the return of the down payment) but one of the things that came up was to get those helicopters that they have already manufactured,” Dy said in a Senate hearing on Republic Act No. 11709, the law setting fixed three-year terms for top military officials.

“They’ve finished some of the helicopters, so that’s one of the things that we’re considering,” he said, without giving the number of choppers already completed.

The Philippines terminated the deal to buy 16 Russian-made Mi-17 choppers worth P12.7 billion shortly before the term of then-President Rodrigo Duterte ended on June 30, 2022.

The decision then was made for fear of US sanctions under the Countering America’s Adversaries through Sanctions Act (Caatsa), after Russia launched its invasion of Ukraine in late February.

Under the Caatsa, countries with major deals with Russia’s defense industry would be slapped with economic sanctions. The Caatsa was enacted in 2017 originally to punish Russia for its alleged meddling in the US elections.

Dy said the DND formally terminated the deal with Russia but both parties had so far communicated only through letters. “We have invited them to come over to discuss how to move forward,” he said.

From Russia to US

The Mi-17 deal would have been the country’s first major defense procurement from Russia.

For many years, the Philippine Air Force (PAF) had eyed the Chinook helicopters of American aircraft manufacturer Boeing for its heavy-lift transport requirement, but the government found them too pricey.

In October last year, Marcos said the country had “secured an alternative new supply from the US” despite calls from Russia to honor the chopper contract.

“I think it was already determined by the previous administration that that deal will not carry through, will not go on,” he said.

It was “unfortunate,” he said, that the advance payment has been made, but “we are hoping to negotiate to get at least a percentage of that back.”

The Russian ambassador to the Philippines, Marat Pavlov, earlier said Manila should fulfill the contract for Moscow to continue to build the helicopters that had been ordered.

“The down payment was made for the start of the assembly operation, so we continue to assemble because we received the money, therefore fulfilling all the contractual obligations,” he said, adding that one fully assembled helicopter would have been delivered in June but it was rejected by the Philippine government.

The Russian government still considers the contract “valid,” said Pavlov. “The embassy didn’t receive any official communication through the very known channel, for example, a diplomatic note. We didn’t receive any note on this very important issue. We are waiting.”

On June 25, 2022, then Defense Secretary Delfin Lorenzana (now head of the Bases Conversion and Development Authority) terminated the chopper deal, citing Duterte’s decision as well as the recommendations made by then Finance Secretary Carlos Dominguez III to Philippine Ambassador to the US Jose Manuel Romualdez.

By way of a suggestion, Romualdez then said that instead of choppers that were not interoperable with existing PAF assets, the Philippines could buy crude from Russia.

“[It’s] not a good idea. In the end, we need to maintain them and it will not be compatible with our Black Hawk helicopters,” Romualdez told the Inquirer. “We already informed the Russian government we would rather get Russian crude for the $38 million we paid.”

DND to talk to Russia over P1.9-B downpayment on scrapped chopper deal