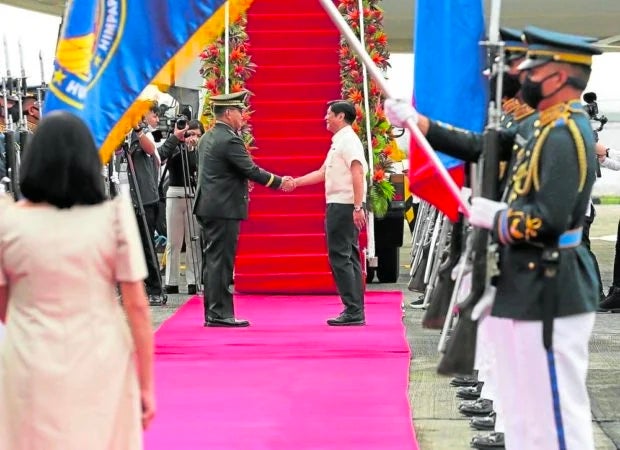 SEEING OFF THE COMMANDER IN CHIEF | Gen. Andres Centino, Armed Forces chief of staff, shakes hands with President Marcos, who left for Davos, Switzerland, from Villamor Air Base on Sunday, Jan. 15, 2023, to attend the World Economic Forum. (MALACAÑANG PHOTO)

MANILA, Philippines — President Ferdinand Marcos Jr. will promote the country as a “leader and driver of growth and a gateway to the Asia-Pacific region” at the World Economic Forum (WEF) in Davos, Switzerland, and look for partners for the government’s plan to build more infrastructure and ensure food and energy security.

Marcos, who left on Sunday for the annual gathering which begins on Monday, was the only leader to be invited from the Association of Southeast Asian Nations (Asean), according to the Department of Foreign Affairs (DFA).

In his departure speech at Villamor Air Base, the President told the crowd that the WEF was hosting a “Country Strategy Dialogue.”

This was an opportunity, he said, to promote the Philippines as a country “that is open for business [and] ever-ready to complement regional and global expansion plans of both foreign and Philippine-based enterprises, anchored on the competent and well-educated Filipino workers, the managers, and professionals.”

Marcos said he would seek out partners for his administration’s ambitious infrastructure plan, emphasizing its objectives “to reinforce robust and resilient supply chains [and] ensure… food security, …while furthering climate-friendly, clean and green energy to power the Philippine economy.”

The president expressed optimism about his first participation in the WEF. He said he looked forward to meeting with government and business leaders, as well as civil society advocates and academic experts.

This year’s WEF, with its theme “Cooperation in a Fragmented World,” is that body’s first in-person gathering since the pandemic.

Marcos was invited by German economist and engineer Klaus Schwab, the WEF’s founder and executive chair, at the sidelines of the Asean and Asia-Pacific Economic Cooperation meetings in Cambodia and Thailand in November last year.

A DFA official had said earlier that the president was planning to do a “soft launch” of his proposed Maharlika wealth fund before political, business, and civil society leaders at the forum.

“They will hear it directly from the president what fundamentals we have, and what led us to decide that we should have a sovereign wealth fund,” Foreign Undersecretary Carlos Sorreta said in a Palace briefing last week.

Senate Minority Leader Aquilino Pimentel III, however, called the move “a ploy” to twist the Senate’s arm into approving the contentious proposal.

“It is more than a marketing strategy. It’s a move to tie the hands of Congress, particularly the Senate, on the controversial measure,” Pimentel said in a statement on Sunday. “[It’s] a ploy to force the Senate into passing the controversial Maharlika Investment Fund (MIF) bill.”

Pimentel reiterated his earlier point that it would not be prudent for Mr. Marcos to pitch a “non-existing” P275-billion investment initiative before the international community.

“Are they sure that it will get through the Senate?” Pimentel asked. “It is too early, too premature.”

He emphasized once more that a state-financed investment fund would be vulnerable “to abuse and corruption.”

The senator cited Malaysia’s sovereign wealth fund 1MDB, or 1Malaysia Development Berhad, which was rocked by allegations of high-level corruption and bribery that led to the downfall and criminal indictment of former Malaysian Prime Minister Najib Razak and some members of his family.

“Instead of focusing our limited resources on the Maharlika Investment Fund bill, let’s debate on legislation that will improve the lives of our countrymen, control inflation, and create opportunities,” Pimentel said.

He added that he was banking on the earlier pronouncements of his colleagues, including Senate President Juan Miguel Zubiri, that the chamber would examine any measure which seeks to establish the MIF.

House Bill No. 6608, or the Act Establishing the Maharlika Investment Fund, was swiftly approved by the House of Representatives on Dec. 15, 2022, after Marcos that day certified its passage as urgent.

Pimentel had said the proposed investment fund would have “extensive effects and ramifications not only [on] our generation, but potentially [on] future generations of Filipinos.”

Davos will be Marcos’ 8th foreign trip in under 7 months