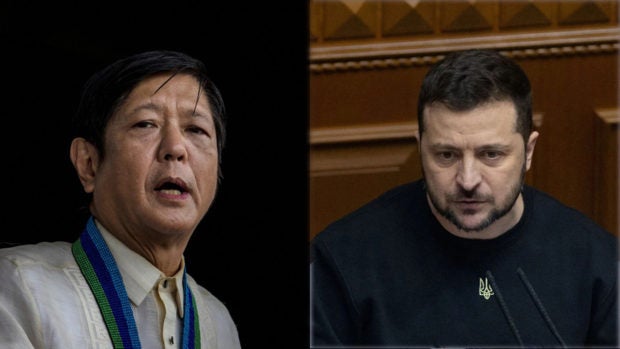 MANILA, Philippines — A Ukrainian diplomat on Friday apologized for the misunderstanding on the standing invitation for a call between their President Volodymyr Zelensky and President Ferdinand “Bongbong” Marcos Jr.

Denys Mykhailiuk, the Chargé d’affaires of the Ukraine Embassy in Malaysia, explained that there was no hint of a complaint when he said during a press conference that the Philippines has yet to respond to his government’s request for a call between the two leaders.

“While I was talking about the relations with the Philippines, I’ve told that we would like to have some improvements on the bilateral level and that’s why we have our request, which was sent when President Marcos was elected and it was still pending,” he said in an interview over ABS-CBN News Channel.

He clarified that the press conference was devoted to the peace plan of President Zelensky, which will be presented to the United Nations in February.

“My dear colleagues, I apologize for any misunderstanding that was caused by not very correct or misunderstood speaking. Thank you for your understanding and I would like to assure you that there is all respect from my side and I hope for Philippine cooperation,” Mykhailiuk said.

He also said that the Philippine government did not give any explanation as to why it has not yet responded to their request.

“It’s not in the regular diplomatic practice that these explanations are given. It is usually stated that it’s under consideration,” the Ukrainian official said.

In a press conference on Wednesday, Mykhailiuk revealed that the Ukrainian government has been reaching out to the Philippines to arrange a phone call between Marcos and Zelensky since June, to no avail.

He said the Ukrainian government wanted to discuss the Philippines’ participation or co-sponsoring on the Peace Formula.

For its part, the Department of Foreign Affairs (DFA) said that such matters should not have been aired out to the media.

“We don’t really appreciate when matters like these are vented by representatives of another government through the press. I think I’ll limit my comment,” DFA Undersecretary Sorreta Carlos said in a Palace briefing on Thursday.

“If he wants it to happen, we have to discuss it. These things are arranged, talking points are discussed, there’s pre-discussion. It’s not good diplomatic practice to be doing it the way he did,” he added.