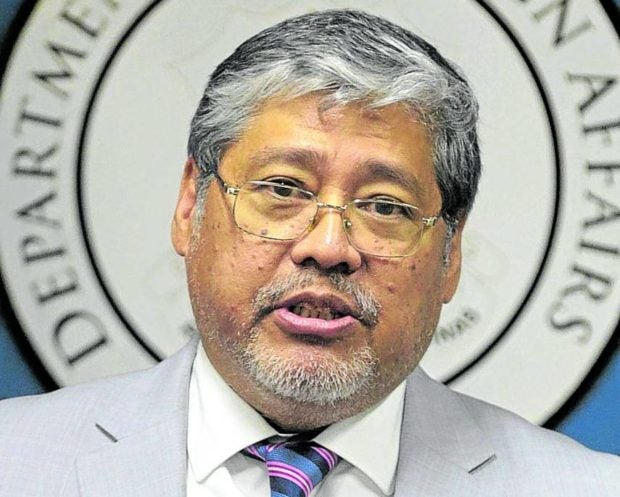 The Philippines has asked China to clarify the discrepancy between each other’s reports on the Nov. 20 incident involving the Chinese Coast Guard’s seizure of rocket debris being towed by the Philippine Navy in disputed waters near Spratly Islands, as Manila stood by its version of an unfriendly interaction between the two sides.

Foreign Secretary Enrique Manalo said on Thursday the note verbale was sent to Beijing on President Marcos’ orders and in response to the purported confrontation near Philippine-occupied Pag-asa Island, whose residents reported hearing explosions, allegedly from the Chinese side, hours after the incident.

Beijing has denied it used force to take back the rocket debris, saying the retrieval was done after “friendly consultation” with the Filipinos.

‘Let’s see how they reply’

“We stand by the statement of the Vice Admiral (Alberto Carlos, chief of the military’s Western Command) and we are taking that to heart and that’s why we have referred to it in fact in a note verbale with China and we’d like to see how they reply,” Manalo said in an interview on CNN Philippines.

The diplomatic note was dispatched as Rear Adm. Toribio Adaci Jr. took the helm of the Philippine Navy on Thursday, vowing to “protect sovereignty and territorial integrity at all times.”

“As your Navy, we are directly involved in preserving and protecting our country’s maritime interests. We will adhere to and stand with the position of our commander in chief… We will protect our sovereignty and territorial integrity at all times,” he said.

Adaci, taking over from interim Navy chief Rear Adm. Caesar Bernard Valencia, echoed Mr. Marcos’ previous declaration that he would not cede “even one square inch of territory” to any foreign power.

His leadership of the sea service commenced only days after the Nov. 20 incident.

According to the military’s report, the Philippine Navy was heading to Pag-asa (Thitu) Island when a China ship appeared and blocked the course of the Navy “twice” and “forcefully retrieved” the suspected Chinese space rocket debris.

In a statement, Carlos said the Chinese sent a small inflatable boat with some personnel to the debris and cut the towing line attached to the Philippine vessel.

But the Chinese Embassy in Manila disputed the report, calling it “inconsistent with facts.”

It said the debris were taken by Chinese coast guards after friendly consultation with the Philippine Navy and that no force was used.

Manalo said the Philippine Navy report was attached to the note verbale.

“We have our own reports but we would like to hear it from the side of China. And at the same time we will continue monitoring the incident and consider what other diplomatic actions might be needed,” the diplomat said.

Should Beijing’s reply be lacking or require clarification, discussions on the matter may continue with another note verbale or an in-person meeting, Manalo said.

He expressed hope the issue would have been settled by the time Mr. Marcos goes on his state visit to China in January where he would meet Chinese President Xi Jinping.

But a fisherfolk group demanded a stronger response from the Philippine side, saying the President should issue a “stern diplomatic protest” over the incident.

“If Chinese militia could easily subdue our naval forces, one can only imagine the threat and fear they bring to our small municipal fisherfolk,” said Ronnel Arambulo, spokesperson of the Pambansang Lakas ng Kilusang Mamamalakaya ng Pilipinas.

He said Mr. Marcos should summon the Chinese ambassador “and convey his formal and stern diplomatic protest to China.”

More than 200 diplomatic protests have been filed by Manila over Beijing’s naval activities within the West Philippine Sea, the name the country uses for a portion of the South China Sea within its exclusive economic zone.

Compensation for their trouble In a Facebook post, maritime security expert Jay Batongbacal noted that if China had just wanted its rocket debris back, it should have compensated the Filipino Navy officers “for the trouble they went through to pick it up,” under the international law on salvage.

The incident with the Chinese Coast Guard occurred a few days before US Vice President Kamala Harris paid a visit to Palawan province, some 480 kilometers away from Pag-asa Island, on Tuesday.

There she reiterated that the United States would defend the Philippines in the face of aggression in the South China Sea.

—WITH A REPORT FROM DEMPSEY REYES