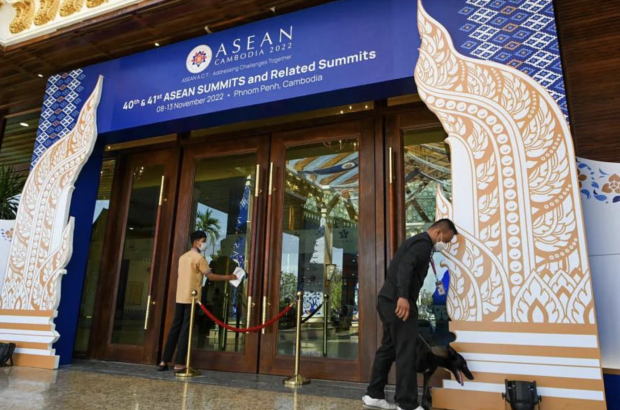 This is the first time that Asean has applied the practice to defense minister meetings. AFP

BANGKOK – Asean defense chiefs held their annual retreat on Tuesday without a representative from Myanmar, amid the prolonged political crisis in the country.

With Covid-19 on the wane, Asean started physical meetings under Cambodia, which is the current chair of the 10-member bloc.

But the regional grouping, which faults the Myanmar junta for not making meaningful progress under its peace road map, shut out junta chief Min Aung Hlaing and Foreign Minister Wunna Maung Lwin by inviting a “non-political representative” from the country for its high-level summits.

This is the first time that Asean has applied this practice to defense minister meetings. Myanmar’s Defense Minister Mya Tun Oo had taken part in the Asean Defense Ministers’ Meeting (ADMM) in 2021, which was held virtually due to the Covid-19 pandemic. In June 2022, he also attended an ADMM in Phnom Penh.

His participation was controversial because the Myanmar military has been accused of deliberately targeting civilians through a scorched-earth campaign in a bid to suppress armed resistance triggered by the February 2021 military coup.

More than one million people have been displaced across the country and over 30,000 civilian properties are estimated to have been burned or destroyed.

The ADMM retreat is usually convened together with meetings between Asean defense chiefs and their counterparts from the bloc’s dialogue partners. US Secretary of Defense Lloyd Austin, Chinese Defense Minister Wei Fenghe and his Indian counterpart Rajnath Singh are among the other defense chiefs taking part in discussions.

At the retreat, the Asean defense ministers exchanged views on the regional and global security environment and on future areas of cooperation. They also approved Canada, France and Britain’s participation as observers of the ADMM-Plus Experts’ Working Groups.

In his remarks to his counterparts, Singapore’s Defense Minister Ng Eng Hen “reflected on the importance of having an open and inclusive regional security architecture that preserves peace and stability, and highlighted the value of the ADMM and ADMM-Plus as key platforms where defense establishments and militaries can engage in strategic dialogue and practical cooperation”, the Defense Ministry said in a statement.

“Dr Ng also noted the broader trend of Asean’s external partners wanting to do more with the ADMM and emphasized the importance of the observership program as a practical and constructive means for the ADMM to engage interested external partners,” the statement added.

Meanwhile, discussion at an Asean-United States Defense Ministers’ Informal Meeting on Tuesday touched on ways to strengthen cooperation on defense capacity-building through training and education, as well as on maritime security.

Asean’s leaders who met at the Nov 11 summit in Phnom Penh agreed on a series of steps to take its stalled “five-point consensus” on Myanmar forward. The foreign ministers were tasked with mapping out timelines for concrete action and the bloc had more flexibility to review Myanmar’s representation at Asean according to prevailing conditions.

The junta has alleged that this amounts to interference and is against Asean’s principles. It said that it was “constructively cooperating” with the Asean special envoy and that blocking Myanmar from participation in further Asean meetings by citing inappropriate reasons was a “one-sided and malicious approach”.

Mr Prak Sokhonn called the mass release “an important gesture in the right direction to create a conducive environment for the commencement of a dialogue process among all concerned parties in Myanmar”.

He announced that he will visit Myanmar for the third time in the coming weeks.

His decision to visit was criticized by opponents of the junta, who argued that the military regime tends to arrest people on trumped-up charges and then release them at critical moments to deflect political pressure.

Ousted state counsellor Aung San Suu Kyi has been detained since the coup in February 2021 and slapped with multiple charges that range from corruption to incitement. Despite repeated requests from many parties, the Asean special envoy has been unable to meet her.