Robredo discusses PH fight vs disinformation at US forum: We made a lot of mistakes | Global News

Robredo discusses PH fight vs disinformation at US forum: We made a lot of mistakes 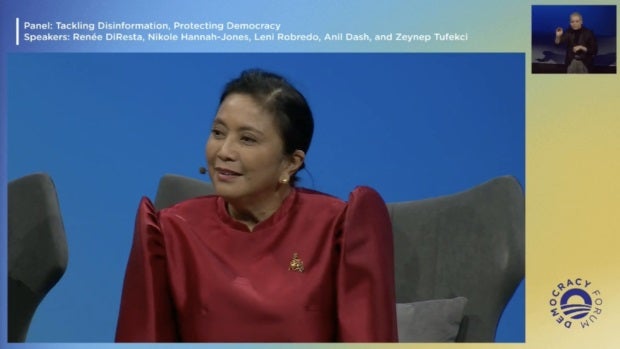 MANILA, Philippines — Former Vice President Leni Robredo has spoken about the fight against disinformation in the Philippines during the Obama Foundation’s Democracy Forum, even acknowledging they made mistakes in addressing so-called fake news.

Robredo said her camp started to correct fake news three years into her term as Philippine vice president, but “it was too late.”

“We committed a lot of mistakes in responding to disinformation. It started really bad in 2016, when I won as Vice President of the Philippines. But the first mistake committed was that my initial stance at the time was, ‘they’re fake news, don’t dignify’. We thought it was the right thing to do,” she said in the forum held November 17 in the United States (November 18 in the Philippines).

“It was like, we were trying to correct but the fact-checking was just being heard in our own echo chambers because there’s a separate reality already. It’s like we could not penetrate into the cells created because of disinformation,” Robredo added.

Disinformation against Robredo would continue to hound her when she ran for president in the May 2022 elections. She had admitted before that disinformation was the biggest challenge to her campaign.

According to Robredo, the polarization was part of the populist playbook, wherein two parties would be pitted against each other.

‘It’s the populist playbook, that you agitate the one party, enrage the other party, and when everything is so polarized, there is no baseline of facts anymore. There’s no chance for people to discuss and do a fair amount of discourse,” the former Vice President of the Philippines said.

Nevertheless, Robredo said the house-to-house campaigning in her presidential bid was a breakthrough – although it came last-minute.

“Our campaign now is to continue those conversations. Start with your traditional networks, like families, work, school, and then go out of the communities,” she said.

The Democracy Forum was initiated by the Obama Foundation, a non-government organization founded by former US President Barack Obama.