MANILA, Philippines- A P200,000 reward for information that would lead to the whereabouts of a missing Swiss student has been put up by relatives Tuesday. 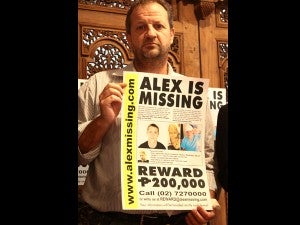 DISTRAUGHT FATHER. Manuel Reich, father of missing Swiss student Alex Reich, has put a P200,000 reward for any information that will lead to the whereabouts of his missing son who has not been heard of since September 22, 2011. Alex's last contact was a text message saying "I’m in a white car - coming soon" as he made his way to the Smart-Araneta Coliseum in Quezon City.

Manuel Reich, father of 24-year old Alex Reich, appealed to the Filipino people to help them look for his son who has been missing since September 22, 2011.

Alex’s last contact was on the night of September 21, when he texted his friend “I am in a white car – coming soon!” They were supposed to come to the Smart-Araneta Coliseum in Quezon City for the American Idol Live concert. There has been no contact from Alex since.

Reich said that they have not received ransom demands so they do not believe he has been kidnapped.

Verena Mathis, first secretary of the Swiss Embassy here in the Philippines is closely coordinating with the Swiss Police led by Jurg Jordi and the Philippine National Police (PNP).

The PNP’s Police Anti-Crime Emergency Unit (PACER), Criminal Investigation and Detection Unit (CIDU), The Department of Foreign Affairs (DFA), and Interpol are all working in together on the case. Local police however, did not speak before the press.

They have published posters and flyers as well as put up a website at www.alexmissing.com to help find the missing foreign national.

Mathis has expressed their commitment to support all efforts that will shed light to the whereabouts of Alex. 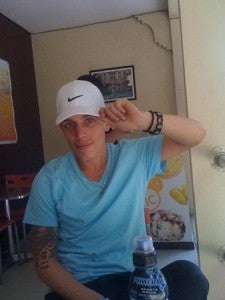 MISSING. A P200,000 reward has been put up for anyone who has information on the whereabouts of missing Swiss student, Alex Reich. He has been missing since September 22, 2011 and was believed to be in a white car and on his way to the Smart Araneta Coliseum in Quezon City. Those who have any information on his whereabouts may contact telephone number 02-727-0000 or send an email to [email protected]

Alex arrived in the Philippines on August 5, 2011 to learn English in a school in Quezon City. He was supposed to stay for just a couple of months to take English lessons.

He visited the Philippine twice before. He visited Baguio and Cebu on those two separate occasions.

Alex has been described as blond and having blue eyes, slim and 5’9” tall. He has a tattoo of a samurai mask on his right arm and piercings on his nose and ears.

He lived in an apartment in Torre Venezia, Scout Santiago cor. Timog Avenue in Quezon City.

Katrin de Guia, one of Alex’s close friends, described Alex as handsome and very friendly. He would talk to people on the jeep and even to security guards at mall entrances, she said.

Reich is very hopeful that they will be reunited again saying “we are familiar with the kindness and friendliness of the Philippine people and are hoping for additional, valuable information.”

Reich further said that the reward will be given to anybody who has information that will lead to Alex. They may contact telephone number 02-727-0000 or send an email to [email protected].