BOHOL, Philippines—The tiny creature turns its head slowly through 180 degrees and stares, boggle-eyed as another group of noisy tourists takes its picture from just inches away. 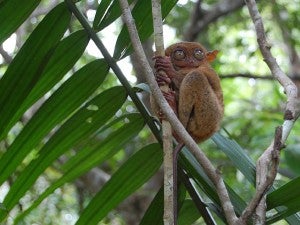 This is the Philippine tarsier, one of the smallest primates in the world. It is a remarkable animal, just 10 centimeters (four inches) tall, weighing 120 grams (four ounces), with a rat-like tail, bat-like ears, and giant eyeballs, each one as big as its brain.

Its strange appearance is obvious, but what these tourists may not realize is that their very presence is putting the animal at risk.

The tarsier is nocturnal, lives in the forest, and is highly sensitive to daylight, noise and human contact.

According to conservationists, if it becomes stressed it will kill itself by bashing its head against a tree or the bars of its cage.

“People go near and they’re loud, or make a picture with the flash, or they’re touching them. Most of those tarsiers, when they become stressed they commit suicide,” says Carlito Pizarras, known as The Tarsier Man.

“They don’t breathe and slowly die. If you put them in a cage they want to go out. That’s why they bump their heads on the cage, and it will crack because the cranium is so thin.”

Pizarras is the field manager at the Philippine Tarsier and Wildlife Sanctuary in Corella on the island of Bohol, one of the country’s most popular tourist destinations.

Unlike other tarsier attractions on the island, visitors at the sanctuary are allowed to look, but not to get too close, and definitely not to touch.

Different species of tarsier are found in the Philippines, Brunei, Indonesia and Malaysia. And populations in all these countries are listed by the International Union for Conservation of Nature (IUCN) as “decreasing”.

The Philippine tarsier, or tarsius syrichta, is categorised as “near threatened”, while species in other countries are already “vulnerable”, “endangered” and “critically endangered”.

As a child Pizarras would hunt tarsiers with his father, a taxidermist. The stuffed creatures were best sellers, fetching P250 ($6) a time.

Aged 12, he decided to start keeping the animals in captivity, venturing into the forests at night to collect crickets for them to eat and learn about their habits in the wild. He realized how sensitive they were to human contact.

By the time he reached his 20s the tarsiers living around his village were becoming scarce. Hunting, habitat destruction and predatory house cats were causing numbers to dwindle.

Pizarras knew he was also partly to blame, so he stopped hunting them and became a pioneer of conservation.

The tarsier became Bohol’s logo, and a big tourist draw. And the Tarsier Man, once derided for his strange behavior, became a national treasure, even presenting a pair of the animals to Britain’s Prince Charles in 1997.

But Pizarras, now in his 50s, believes not enough is being done to protect the creature. It may be a tourist symbol, but more should be done to make it a symbol of conservation.

“In other areas they are still putting tarsiers in cages for the tourists,” he says. “I don’t know why but the government gives them permits.”

At one of these attractions, a guide calls to a group of tourists and points to a tarsier clinging to a tree branch.

“Now there you are, I think you are hiding,” he says in a loud sing-song voice, before encouraging the group to move closer and take a picture.

A sign warns visitors not to use their camera flash, and the guide tells them not to touch.

But the tarsiers here live in a thinly forested area, with light seeping through. Their ultra-sensitive eyes are murky, and their movements slow. At this time of day they should be asleep.

“Before we put them in our hands,” the guide says. “But if you touch, they die. They are so very sensitive.”

These ones have been “domesticated” using cages, he adds, and now they are “tame”.

Pizarras argues that tarsiers in the wild are very defensive and do bite — and that these docile animals are not tame but weak.

“The tarsier is a superstar but unfortunately it’s suffering because of its fame,” says Joannie Mary Cabillo, the programme manager at the Tarsier and Wildlife Sanctuary.

“The government is backing up but not that much. We have a presidential proclamation and laws to protect the tarsiers but unfortunately nobody is sanctioned.”

The government declared the tarsier a “specially protected” species in 1997, outlawing hunting of the animal, and effectively banning restaurants and souvenir shops from keeping them on display.

Theresa Mundita Lim, director of the Protected Areas and Wildlife Bureau at the Department of Environment and Natural Resources (DENR), says the indications are that the tarsier population has gone up since then.

But she acknowledges that tarsier tourism is a double-edged sword, and more needs to be done to protect the animal.

“We can still do more through education and stricter enforcement,” she says. “There has to be stricter monitoring, also for tourists.

“It’s not just up to us. We issue the policy but the policy needs to be implemented at the field level.”

The DENR’s tarsier conservation programme has an annual budget of P5 million ($115,000).

“It’s not enough. But we also rely on social mobilization,” says Lim, adding that it is sometimes concerned tourists who report centres where the tarsiers are not being well treated.

People caught breaching the wildlife act can be fined or even jailed, but tarsiers are still found on the black market in Manila for sale as pets, fetching about P6,000 each.

There are only several hundred tarsiers left living in the wild on Bohol, according to the Philippine Tarsier Foundation.

Pizarras says most of these live in the 167 hectares (413 acres) of forest around the sanctuary — elsewhere it is much harder for them to thrive.

“In the 70s the population was going down so I decided on my own to stop hunting tarsiers,” he says.

“My father got angry with me because this was our means of livelihood.

“But I said maybe someday my kids and my grandchildren can see them no more, and he understood.”