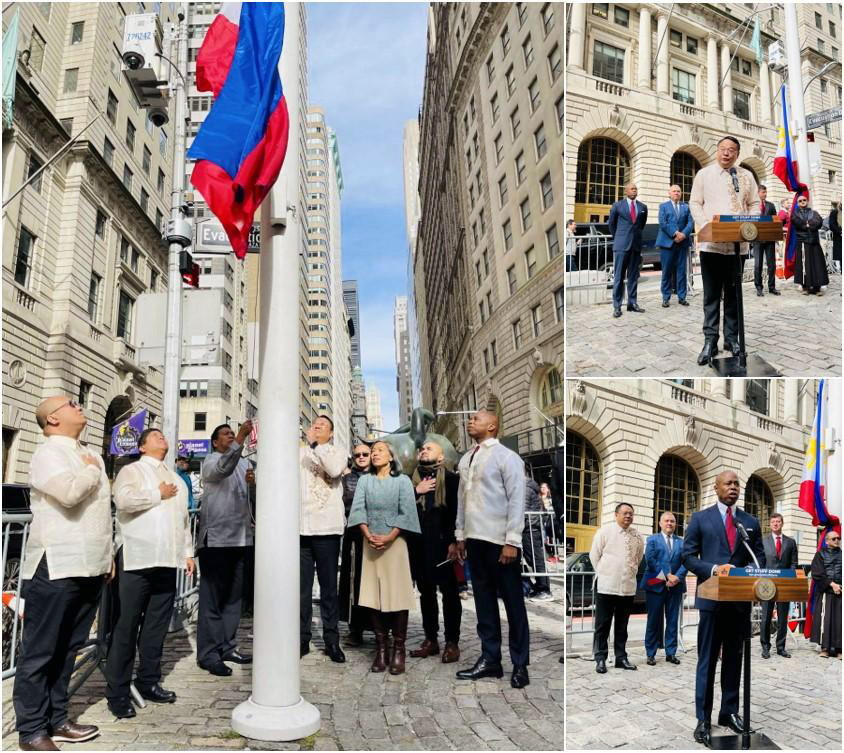 Left photo: On October 28, 2022, the Philippine flag was raised for the very first time by the City of New York at the Financial District in commemoration of Filipino-American History Month. Consul General Elmer G. Cato, Mayor Eric Adams, Deputy Mayor Maria Torres Springer, and others gaze at the Philippine flag as it is hoisted. Upper right photo: Consul General Elmer G. Cato speaks about the first Filipino settlement in the coastal wetlands of Louisiana back in 1587, and how hundreds of years later, the Filipino community has spread across the United States of America. (Photo by Tanya Faye O. Ramiro). Bottom right photo: Mayor Eric Adams speaks about the importance of inclusivity in New York City. (Photos from NYPCG. Credits to Mr. Marc Lacanlale and Ms. Tanya Faye O. Ramiro) Courtesy of DFA

MANILA, Philippines — The Philippine flag has been raised in New York City for the first time in commemoration of the Filipino-American History Month.

“[The event] is a recognition of the many contributions and achievements of Filipinos to New York City, particularly our doctors, nurses, and other healthcare workers, following the outbreak of the coronavirus pandemic,” Consul General Elmer Cato said during the ceremony.

The office of Adams shared that they plan to make the flag-raising ceremony a yearly event as the New York City mayor emphasized the value of inclusivity and recognized the immigrants working for his administration.

Prior to the Philippine flag-raising event, the Cebuanos Engaging In Building Unity performed a cultural dance. A shortened version of the Sinulog-Santo Niño Festival was also staged.

The Philippine National Anthem, Lupang Hinirang, and the United States’ Star-Spangled Banner were then sung by Filipino Soprano, Mheco Manlangit.

Also during the event, a Filipino nurse, Quimberly Villamer, employed by a major hospital in New York City, shared her experiences as a frontline healthcare provider during the peak of the COVID-19 pandemic.

The DFA likewise noted that it was the first time Adams engaged with the Filipino-American community and the Philippine Consulate General in New York. —Kristelle Anne Razon, trainee