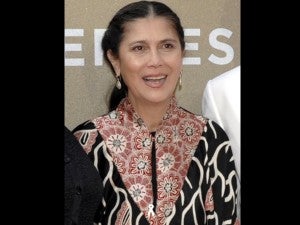 The CNN website described her as “an American woman who has helped thousands of poor Indonesian women have a healthy pregnancy and birth.”

But to relatives in Baguio City, Robin Lim, the CNN Hero of the Year for 2011, is “very Filipino”.

Named this year’s hero by the American cable news channel after an 11-week vote on CNN.com, Lim will receive $250,000 for her foundation, on top of the $50,000 she and other honorees got for making it to the Top 10.

Lim is the second honoree of Filipino descent to be included in CNN’s roster of heroes.

In 2009, educator and social worker Efren Peñaflorida Jr. was named CNN Hero of the Year for his exceptional advocacy of educating Filipino out-of-school youths through his so-called “pushcart classes.” Peñaflorida, who grew up in the slums of Cavite province, founded the Dynamic Teen Company, which also supported Lim’s nomination.

In one of her letters to the Inquirer Northern Luzon Bureau, Lim described her campaign for the CNN Hero title as a crusade she made on behalf of every mother in the world.

“My CNN nomination is for the new mothers, who give birth in small dimly lit rooms all over our planet day and night,” she wrote in a letter dated Oct. 17. “They are the true heroines. When I ask people to vote for me, I know it is not for me… I want it for them.”

Lim accepted her award on Monday in an event dubbed “CNN Heroes: An All-Star Tribute” at Shrine Auditorium in Los Angeles.

“Lim’s nomination and selection as CNN Hero of the Year is a victory for all of us because she is so proud of her Filipino ancestry. Her mother was born in Baguio. Her late maternal grandmother, Vicenta Munar Lim—whom she idolized—is pure Filipino,” according to Robin’s cousin, Remy Lim.

Remy said Lim often gave credit to her grandmother, Nanang Vicenta, a midwife who served in Baguio during World War II, in all the literature about the nonprofit, village-based organization that she organized in 2003.

Lim’s family in the Philippines had also campaigned for her bid in the CNN search through social networking sites, Remy added.

Part of the campaign was last month’s showing of the film “Guerrilla Midwife,” a documentary about Lim’s natural child birth advocacy, at the Mt. Cloud Bookshop on Baguio’s Session Road.

“Much love and big congratulations to Robin Lim!” Mt. Cloud said in a message posted on its Facebook account.

The company also invited the public to get “more insights into Robin’s life” by reading her novel, “Butterfly People.” Launched by Lim at the bookshop in November last year, the novel set in Baguio City is based on the life of her grandmother and their family’s history, it added.

“We hope that with her winning the CNN Hero title, Robin will be able to pursue her dream of putting up a clinic in Baguio… I hope that the people here will support her if she ever pursues her dream,” Remy said.

At the rites in Los Angeles, Lim accepted her award from the host, CNN anchor Anderson Cooper, and called on the public to promote “safe and loving birth.”

“Today on our Earth, 981 mothers in the prime of their life will die… I’m asking you to help change that. Every baby’s first breath could be one of peace and love. Every mother should be healthy and strong. Every birth could be safe and loving, but our world is not there yet,” she said.

Lim also noted that the high maternal and infant mortality rates in Indonesia, for example, were due to medical costs rising beyond the reach of many women.

In a CNN interview earlier this year, Lim said: “The situation is bad … babies are unattended, deliveries have become commercialized and mothers die from hemorrhage after childbirth because they can’t afford proper care.”

Monday’s program also honored the nine other individuals in the CNN Heroes Top 10:

Sal Dimiceli, who supports 500 people a year with food, rent, utilities and other necessities through his charity column for the Lake Geneva Regional News in Wisconsin.

Derreck Kayongo, who created the Atlanta-based Global Soap Project that has provided about 150,000 bars of soap for communities in 10 countries.

Diane Latiker, who formed the antigang violence community program Kids Off The Block and opened her home on the south side of Chicago to get the youth off the streets.

Patrice Millet, who put up a nonprofit youth soccer program in Haiti that offers coaching and food to hundreds of participants from the slums.

Bruno Serato, who has been serving free pasta dinners to poor children at the Boys & Girls Club in Anaheim, California.

Richard St. Denis, who founded the World Access Project, which has provided hundreds of wheelchairs and mobility aids to people with disabilities in rural Mexico.

Amy Stokes, who has helped orphans rebuild their lives through the nonprofit organization Infinite Family, which connects with volunteer mentors via the Internet.

Burns, founder of Every Mother Counts, a campaign to boost education and support for maternal and child health, introduced Lim’s video tribute during the show.

“Eight years ago, after giving birth to my first child, Grace, I felt what could have been a life-threatening complication,” Burns said. “It suddenly got very scary, very fast. If I hadn’t received the expert care in the hospital birthing center I was in, then I may have not been so fortunate.”

Read Next
Study: Life possible on ‘large parts’ of Mars
EDITORS' PICK
Mass testing on April 14; but who to test is unclear
Cash aid trickles down to cities meeting DSWD requirements
US urges masks as dramatic steps to combat virus roll out
Rights groups wary as NBI summons 17 for ‘fake news’
Quick chat with Nicole Andersson: ‘You really don’t need much to be happy’
Quest for COVID-19 cure: PGH needs blood samples from recovered patients
MOST READ
Angelica Panganiban on endorsing Duterte in 2016: ‘Patawarin niyo ko’
PACC to NBI: Probe Robredo for ‘competing with national govt’ in fight vs COVID-19
PACC’s COVID-19 motto? ‘Lahat ng tutulong, ikukulong’ — Lacson
5 Filipinos on Forbes Asia’s “30 Under 30” roster
Don't miss out on the latest news and information.