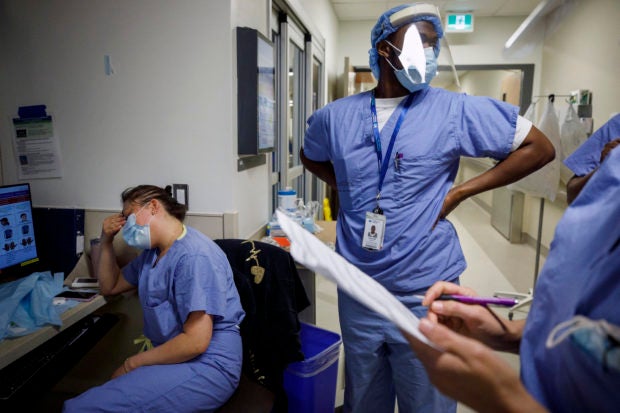 In this file photo taken on April 28, 2021 A nurse holds her head as nurses care for patients suffering from coronavirus disease (COVID-19) at Humber River Hospital’s Intensive Care Unit, in Toronto. AFP

OTTAWA — An acute nursing shortage is clogging or even closing hospital emergency rooms across Canada, pushing an already stressed national health system to the brink with potentially severe consequences for patient care.

Burnout from the Covid-19 pandemic, abuse from patients and salary discontent have seen nursing staff quitting their jobs in droves, and experts say the situation is only likely to worsen.

The impact on emergency care is such that Ottawa police recently had to take a shooting victim to hospital in their squad car, rather than wait for an ambulance, and an elderly woman who fell and broke her hip was forced to wait six hours for help from paramedics based 100 kilometers (62 miles) away.

Over the summer and into the fall, staffing shortages meant dozens of emergency rooms were forced to close — sometimes for a night or a weekend, sometimes longer.

“They’re numb, deflated and feeling hopeless,” said Cathryn Hoy, president of the Ontario Nurses’ Association. Herself a nurse for 20 years, she described the situation as “critical.”

Amelie Inard, 32, was taken to an ER in Montreal this week, in extreme pain and peeing blood.

The place was packed, and an overwrought nurse told her to describe her condition “in one sentence, really quickly, because of how busy they were,” Inard said.

She eventually left in frustration, without seeing a doctor.

Hospital workloads are rising, Hoy said, along with patients’ exasperation over extended wait times, leading to a spiking of violence against nurses.

Several nurses told AFP they had been punched, scratched or spat on, and had trays, dishes and feces thrown at them.

In the capital Ottawa, ambulances were unavailable on more than 1,000 occasions from January to July, as paramedics were stuck waiting to unload patients at crowded ERs.

A hospital in Peterborough, east of Toronto, in the past week was forced to treat patients on gurneys in the parking lot because its ER was full, said Hoy.

In Manitoba, doctor Merril Pauls said there had been “multiple times throughout the summer when we had to shut down beds in the emergency room” at Winnipeg’s Health Sciences Centre because of the nursing shortage.

On one recent Sunday, he said, “We had too many people coming in and had no place to put them. We literally were double-bunking critical patients in a resuscitation bay.

“Our nurses are really working in crazy conditions.”

It’s a “really significant phenomenon going on across the country,” the doctor added, and it’s “getting worse.”

A recent survey by the Canadian Union of Public Employees, the country’s largest labor union, found that 87 percent of nurses have considered leaving their job “because of the thankless and grueling working conditions.”

Federal health minister Jean-Yves Duclos has vowed to make it easier for foreign credentials to be recognized. That could help 11,000 internationally trained doctors and nurses get jobs in their field in Canada.

But that won’t be nearly enough, with 34,400 nursing positions now vacant, according to government data.

Compounding the problem, many Canadians — like Inard — don’t have a family doctor and turn to emergency rooms for care.

“It’s just so difficult to find a family doctor,” she said.

And a frequent shortage of regular hospital beds often means long waits to transfer patients out of ERs to wards.

Ontario passed a bill at the end of September permitting transfers of patients awaiting long-term care to facilities up to 150 kilometers away.

But critics say it could force frail, elderly people into care homes far from their loved ones.

For now, almost everyone needing treatment is eventually seen. But delays can pose long-term consequences for patients’ health.

“If a stroke patient doesn’t get access to a clot-busting medicine fast, brain cells will die and the patient will end up being more disabled than they would have been,” Pauls said.

Serious infections can be deadly if not treated in time. So, too, can cancers and other diseases, he added.

Pauls recalled routinely telling discharged patients “to come back if things get worse.”

“But now they laugh at us. They say: ‘You’re crazy. There’s no way I’m going to go through this again.'”