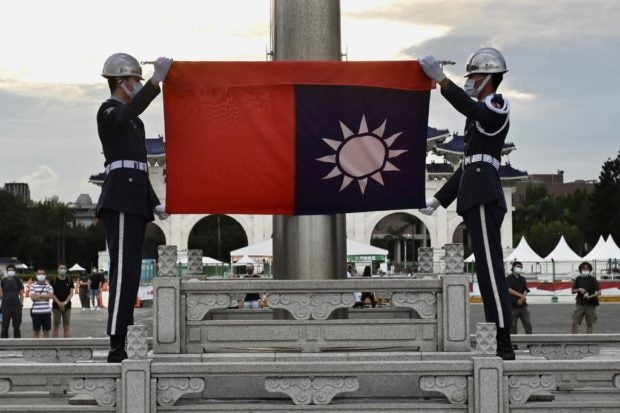 Honor guards fold the Taiwan flag during a flag lowering ceremony at the Chiang Kai-shek Memorial Hall in Taipei on June 4, 2022. (Photo by Sam Yeh / AFP)

MANILA, Philippines — Taiwan expressed hope that the Philippines would support its bid for inclusion and participation in major global discussions including those in the United Nations (UN) system, as the world holds the 77th United Nations General Assembly.

In a statement, Taipei Economic and Cultural Office in the Philippines Representative Peiyung Hsu said they hope their closest neighbor can voice their support for Taiwan’s long-standing aspiration of being allowed to join and contribute to global initiatives.

“As close neighbors and maritime nations, Taiwan and the Philippines uphold the values of freedom, democracy and the rules-based international order. Taiwan and the Philippines enjoy longtime cordial people-to-people relations. We sincerely hope that our Filipino brothers and sisters could continue to voice their support for Taiwan’s meaningful participation in the UN system,” Hsu said on Sunday.

“In promoting postpandemic recovery and reconnecting the world, now is the best time for UN to reconnect with Taiwan. Taiwan aspires to contribute. The 23.5 million resilient Taiwanese people surely should be included for the global good,” he added.

According to Hsu, Taiwan can contribute especially in the field of COVID-19 response and fighting climate change — while noting that the people of Taiwan deserve to be heard especially as it remains committed to the UN Sustainable Development Goals.

“At this juncture, it is worth reminding these leaders that all people – including the people of Taiwan – deserve to have their voices heard and efforts included for the global good,” he noted.

“A beacon of democracy in Asia and a force for good in the world, Taiwan is a reliable and valuable partner and Taiwan is committed to implementing the UN Sustainable Development Goals, and combating climate change with a blueprint for net-zero carbon emissions by 2050,” he added.

Hsu also claims that the old “One China” policy implemented by the United Nations has been misleading, because Taiwan is separately governed from the People’s Republic of China or the mainland.

Currently, most global organizations like the UN recognize only one China — the People’s Republic of China — which means that Taiwan on its own cannot go to world conventions as it is already represented by the mainland government.  This also means that in the 77th UNGA, like in previous occasions, Taiwan would not be able to participate.

But Hsu said that UNGA Resolution 2758 does not take a stand or even mention “Taiwan”.

“By deliberately conflating its ‘One China’ principle with the UNGA Resolution 2758 — the resolution that determined who represents ‘China’ in the organization some 50 years ago—Beijing is misleading the world by spreading the fallacy that Taiwan is part of the PRC,” he said.

“Contrary to these false claims, the resolution does not take a position on Taiwan, nor does it include the word ‘Taiwan’. The long-term status quo is, the ROC (Taiwan) and the PRC are separate jurisdictions, with neither subordinate to the other. The people of Taiwan can only be represented in the international community by their free and democratically elected government,” he added.

This is not the first time Taiwan called on other countries to include the self-ruled island in global discussions.  During the height of the COVID-19 pandemic, the country asked that the UN and the World Health Organization allow them to participate in talks, noting that they can significantly contribute to efforts to end the health crisis.

READ: Taiwan seeks WHO membership so it could help fight COVID-19 pandemic

At one point, Taiwanese President Tsai Ing-Wen herself stressed that Taiwan’s continuous exclusion from several international bodies and meetings like the recent World Health Assembly (WHA) is a loss for the whole world, given the country’s success in fending off the coronavirus pandemic and being able to increase mobility without running the risk of more infections.

Taiwan said that the different pandemic strategies and results that they have obtained when compared to the People’s Republic of China should be proof that the two nations are not the same.