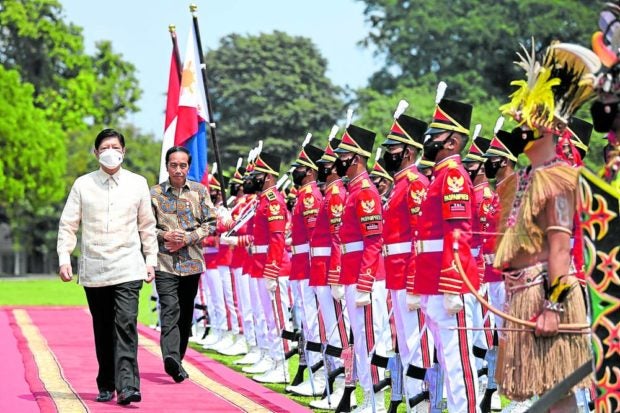 WELCOME HONORS | Indonesian President Joko Widodo (second from left) walks with Philippine President Marcos as they inspect the honor guards at the Presidential Palace in Bogor, Indonesia, on Monday, Sept. 5, 2022. Indonesia is hosting Marcos’ first official foreign visit since he assumed the presidency on June 30, 2022 (REUTERS)

On the second leg of Marcos’ three-day state visit here, the two heads of state also vowed to hasten negotiations on the delimitation of continental shelf based on the United Nations Convention on the Law of the Sea (Unclos) to ease the tension among countries with overlapping claims over the resource-rich South China Sea.

“We continue to work on growing our relationship to making it stronger,” the President told reporters after his meeting with Widodo at the Bogor Palace.

“Our discussions progressed so rapidly that we… have agreed to organize task forces already to meet and discuss even at a technical level, no longer at the political or diplomatic level,” he said.

Marcos, whose official delegation was led by first lady Lisa Marcos, said having task forces would allow the two countries to “take full advantage of the opportunities that we feel are available to us and that we will need to exploit to succeed in the near future.”

Such an arrangement among countries, he noted, would help ensure economic and political stability in the Southeast Asian region.

“These partnerships that we make with all our partners, allies, and friends around the world will be of critical importance so that we remain stable as we grow out of the pandemic economy,” the president said.

After the midmorning traditional welcome rites for a visiting head of state, Marcos and Widodo immediately buckled down to work by witnessing the signing of four agreements, led by a plan of action between the governments of Indonesia and the Philippines from 2022 to 2027, which was presented by Foreign Secretary Enrique Manalo and Indonesian Minister for Foreign Affairs Retno Marsudi.

Manalo and Marsudi also signed a memorandum of understanding (MOU) between the two governments on cultural cooperation.

Trade Secretary Alfredo Pascual and Indonesian Minister of Tourism and Creative Economy Sandiaga Uno presented the MOU for cooperation in the development and promotion of the creative economy between Indonesia and the Philippines.

According to the UN Conference on Trade and Development (Unctad), a creative economy is an evolving concept that builds on the interplay between human creativity and ideas and intellectual property, knowledge, and technology. It is essentially the knowledge-based economic activities upon which the “creative industries” are based, it said.

Marcos and Widodo also agreed to further strengthen border cooperation by reviewing two existing security agreements so that these would remain relevant for communities in border areas.

President Marcos noted that he and Widodo both recognized the need to strengthen the Association of Southeast Asian Nations (Asean) in safeguarding the interests of its member-states.

The Philippines and Indonesia, along with Malaysia, Singapore, and Thailand, were among the countries that founded the regional bloc in 1967.

“We also spoke at length about the role that we believe Asean should play while we face the difficulties in this very volatile time in geopolitics not only in our region but also in the rest of the world,” Marcos said. 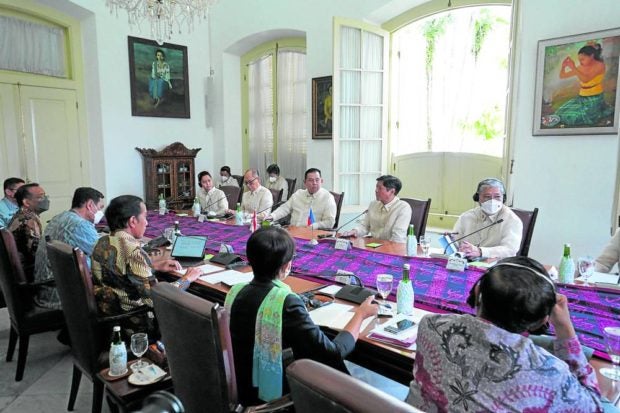 ALL BUSINESS | Philippine President Marcos and his delegation meet with Indonesian President Joko Widodo and his officials at the Presidential Palace in Bogor, West Java, to discuss the two countries’ partnerships in trade and defense, among other issues. (BOGOR INDO ISTANA PHOTO)

“We agreed that Asean is going to be the lead agent in the changes that we would like to see in continuing to bring peace to our countries,” he added.

Widodo expressed elation over the improved economic investments between his country and the Philippines. In 2021, trade between the two countries amounted to $9.5 billion, with Indonesia dominating the relationship with $8.6 billion in exports to the Philippines.

The Indonesian leader said he was pushing for the revitalization of the roll-on, roll-off shipping routes between Bitung, Indonesia, and the Davao region in Mindanao, and the reopening of the Manado-Davao City flight route.

Widodo said he was looking forward to improving the relations between the two countries to facilitate more investments in infrastructure and strategic industries, noting the Philippines’ recent procurement of two landing platform dock vessels and a railway signaling system from Indonesian firms.

“I hope that the (Philippines’) planned purchase of NC212i aircraft from PT Dirgantara can be realized,” the Indonesian president said.

She said the president’s trip would not only improve the cooperation between the two countries but would also help modernize the Philippine military with the planned purchase of defense equipment from Indonesia.

“[The president’s state visit] was very productive, extremely so because the president did not expect that the talks between him and President Widodo would progress so rapidly in such a short time,” Angeles said in a news briefing.

“What was surprising is President Widodo’s willingness to cooperate and also his statement regarding Asean and the reliance on Asean as a structure for which we can cooperate on matters like defense,” she noted.