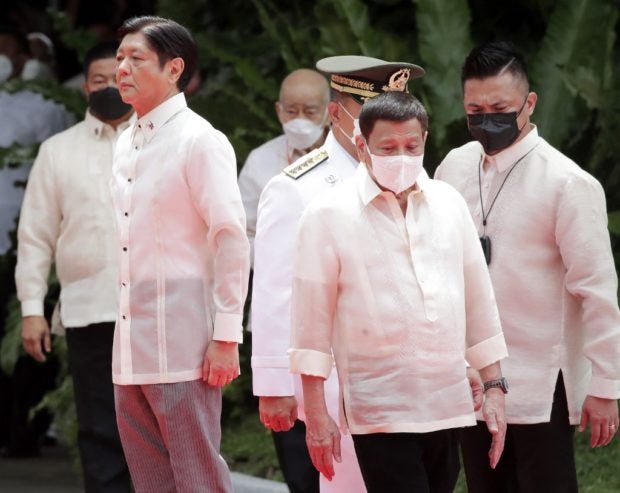 FILE PHOTO Incoming Philippine President Ferdinand Marcos Jr (L) and outgoing President Rodrigo Duterte (C) take part in the inauguration ceremony for Marcos at the Malacanang presidential palace grounds in Manila on June 30, 2022. The son of the Philippines’ late dictator Ferdinand Marcos was to be sworn in as president on June 30, completing a decades-long effort to restore the clan to the country’s highest office. (Photo by Francis R. MALASIG / POOL / AFP)

JAKARTA — The new Philippine President Ferdinand “Bongbong” Marcos Jr is expected to arrive in Jakarta today for a three-day visit, as part of his tour to introduce himself to fellow ASEAN leaders.

But more than just a courtesy visit, Bongbong will carry a more pressing agenda when meeting with President Joko “Jokowi” Widodo, namely to save a Filipino citizen from execution.

Yogyakarta District Court sentenced Mary Jane Veloso to death in October 2010 after finding her guilty of trafficking heroin in April of that year.

Then president Benigno Aquino III rescued her from the death squad in April 2015 in the very last minutes, after he phoned President Jokowi. Her execution was delayed but the death sentence remains.

Mary Jane can hope for pardon or clemency from Jokowi as a last resort and Bongbong can convince Jokowi that she deserves it, although the Philippines under Bongbong’s predecessor Rodrigo Duterte saw a more brutal fight against drugs than Indonesia.

The Jokowi administration has since 2017 suspended executions following pressures from outside and within. Indonesian law is among the world’s harshest against drug-related crimes. Dozens of drug convicts on death row are now waiting for judgment day in several prisons across the country.

Understandably, Bongbong will do everything to win the heart of Jokowi. Like other Philippine leaders, Bongbong has a responsibility to protect his citizens, particularly millions of Filipino migrant workers.

In the Philippines, the issue is politically sensitive for domestic audiences, therefore securing Jokowi’s clemency for Mary Jane will be a huge achievement for Bongbong.

We also hope that apart from the humanitarian affair, the two leaders will reach a concrete agreement on how to foster bilateral relations and on how to develop ASEAN into a more democratic and prosperous community.

Indonesia is another big source of migrant workers, mostly employed as housemaids in Malaysia, Singapore, Hong Kong and Middle East or in the plantation industry in Malaysia.

Indonesia is following the footsteps of the Philippines in the field of overseas citizen protection. One of the most important tasks of Indonesian embassies and other diplomatic representatives is to ensure the safety of millions of citizens abroad, especially women migrant workers who are vulnerable to abuses.

Indonesia has made progress in this regard. Hopefully the two presidents will reach a win-win solution on the Mary Jane case and the two democracies will work together toward promotion of civil liberties in the region.

The most urgent problem is how to face the Myanmar junta under Gen. Min Aung Hlaing. Malaysia and Singapore have worked along with Indonesia to put atrocities in Myanmar to an end, while the Philippines under Duterte deemed the crisis in Myanmar as a domestic affair.

The Philippines is an ASEAN founding member along with Indonesia, Malaysia, Singapore and Thailand. The regional grouping is playing more crucial roles than ever now that tension is brewing in the South China Sea. President Marcos Jr’s role in raising ASEAN’s standing is highly expected.

Welcome to Jakarta, President Marcos Jr. Hopefully there will be good news for Mary Jane, too.