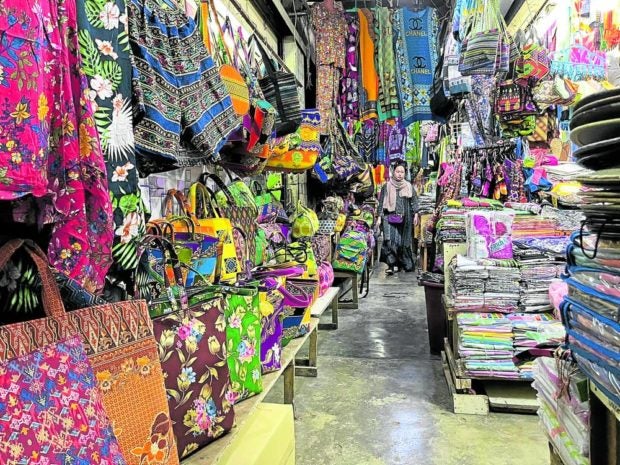 BAD FOR BUSINESS | The legal battle over Sabah between Malaysia and the heirs of the late Sultan of Sulu could end the duty-free shipment of goods from Sandakan to Mindanao, like these colorful handicrafts and textiles on display at Canelar Barter Trading Center in Zamboanga City. (Photo by JULIE S. ALIPALA / Inquirer Mindanao)

ZAMBOANGA CITY, Zamboanga del Sur, Philippines — Barter traders here are starting “to feel the heat” from the legal dispute between the Malaysian government and the heirs of the late Sulu Sultan Jamalul Kiram II, who won a $14.92-billion restitution award from a French arbitration court in February.

Although Sultan Kiram II died in 1936, his heirs continued to receive rental payments for the 1878 lease over Sabah by the British North Borneo Company, which Malaysia continued as successor-in-interest from 1963 up to 2012. When 100 armed men who called themselves the Royal Army of Sulu laid siege on Lahad Datu town in Sabah in 2013, Malaysia stopped the payments, triggering the lawsuit filed by Kiram II’s heirs.

The sole arbitrator of the case, Gonzalo Stampa, ruled that the heirs are entitled to restitution equivalent to 15 percent of what Malaysia earns in taxes and fees from the oil and gas production, as well as the oil palm industry in Sabah. Malaysia was also ordered to pay the cost of arbitration, with interest.

Mark Basaluddin, executive officer and chair of the Canelar Barter Trading Center, told the Inquirer that the legal battle has “somehow affected our trading operations in Sabah.”

Following the arbitration award, Basaluddin said Sabah authorities have suddenly become strict with Filipino traders, and have made COVID-19 testing a requirement for entry. They have also imposed “much higher customs duties and fees.” Many Filipinos working in Sabah were sent home, with his own workers stationed there “feeling the heat” as well.

“It’s taking a toll on us… We were informed by our Filipino workers that Malaysian nationals see them as a threat. We don’t want to experience the situation we were in during the lockdown and during that Lahad Datu incursion,” Basaluddin said. He added: “(On) entering Sabah now, we are subjected to screening and interviews. (The authorities) are afraid that we might be bringing armed men.”

The fear stems from the Lahad Datu siege that resulted in a standoff between the Malaysian government and the armed men from Sulu, which lasted over a month. When it was over, Malaysia launched a crackdown on illegal aliens, sending thousands back to Mindanao. Entry by traders into Sabah was also heavily regulated, with new customs duties and fees crippling the flow of goods and resulting in the shutdown of many shops in the Canelar center.

Although the collection of fees was relaxed starting in 2016, the barter group expressed apprehension that the arbitration case might again lead to new restrictions on goods coming into Malaysia.

Numbering some 200, the traders from Zamboanga mainly procure and ship goods from Sandakan, the second largest city in Sabah. Every quarter, they bring in four container vans of goods worth some P40 million from Sandakan, via chartered boats.

The goods, which include textiles (malong among them), coffee, milk, canned goods, noodles, slippers, chocolates, and biscuits, are then sold retail at the Canelar center.

Shops employ ‘barkers’ who earn commissions from every purchase.

Balasuddin is appealing to the national government to look deeper into the matter. “It may not be a political claim but ordinary Malaysians see the situation differently. It might also be exploited by other groups with political interests,” he added.

Gustaham said his group was told that young men and women were being recruited to become foot soldiers in an effort to reclaim Sabah. He stressed, however, that their efforts to verify the information revealed that the Sulu sultan’s heirs had nothing to do with the recruitment.

“Some groups are exploiting the issue, capitalizing on the (vulnerability of) young minds,” Gustaham said. “We are raising these concerns (that) some might dismiss as a non-political issue. But for us who survived wars and conflicts, this Sabah claim and its effect on our people will always be political.”