PhilSA: No warning about China rocket 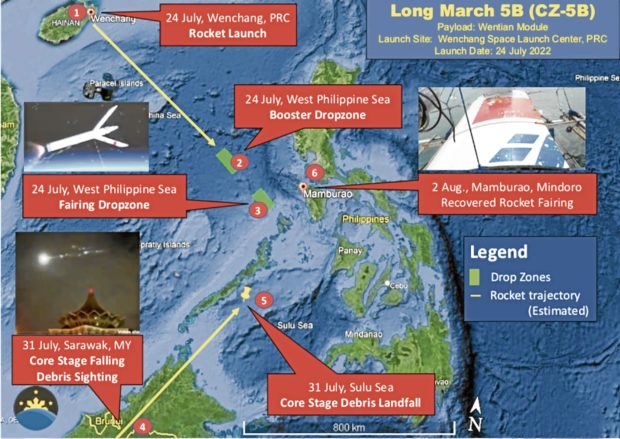 MANILA, Philippines — The Philippine Space Agency (PhilSA) confirmed on Wednesday that debris found floating in the West Philippine Sea by fishermen was part of the Long March 5B rocket China launched on July 24.

The rocket, claimed by Beijing to be its most powerful, reentered the atmosphere at 12:45 a.m. on July 31 (Manila time) over the Indian Ocean, and subsequently crashed over the Sulu Sea near Palawan.

“Upon visual verification, the Philippine Space Agency confirms that the debris was part of CZ-5B,” PhilSA said, referring to Changzheng 5B, the rocket’s other name.

In a separate statement, it called on spacefaring nations to “abide by the protocols and mechanisms enshrined in the [United Nations] Outer Space Treaty, encourage close coordination, and timely resolution of issues such as space debris mitigation. This will eliminate the potential damage, harm or injury, or even loss of life on Earth.”

The Philippine Coast Guard reported on Tuesday the retrieval of a torn sheet of metal around 160 kilometers off the coast of Mamburao, Occidental Mindoro province.

Found by local fishermen on July 26, only part of the debris measuring 1 meter in width and 5 m in diameter was brought back to land as it was too big. It bore part of the Chinese flag and markings of the Long March 5B rocket.

In a press briefing, Julie Banatao, chief of PhilSA’s Spacecraft Payload and Communications Systems Division, said the debris found was part of the rocket’s payload fairing, which detached as it entered outer space during launch.

“These discarded rocket stages are usually designed and planned to shed over specific drop zones. The drop zones are usually bodies of water and are selected to minimize the hazards of falling onto populated areas,” she said.

The United States’ National Aeronautics and Space Administration (Nasa) earlier criticized Beijing for failing to share crucial data about the trajectory of the 25,000-kilogram rocket.

The module it carried was part of Chinese effort to build the Tiangong space station that is expected to house a series of experiments and extra sleeping quarters for astronauts.

Engineer Edgar Paolo Violan, chief of PhilSA’s Space Security and Technologies Division, said Chinese officials or the China National Space Administration did not notify them before the launching that the rocket’s stages — the booster, payload fairing and core stage — would drop over the country’s airspace.

Unlike the core stages of most rockets which are steered to a safe disposal shortly after launch, the Long March 5B reached the orbit along with its payload, and eventually crashed in an “uncontrolled reentry.”

Violan said PhilSA monitored the trajectory of the launch and issued navigational warnings, along with the Civil Aviation Authority of the Philippines, for rocket debris falling over parts of the West Philippine Sea.

“But we did not expect [the debris] to fall in the Sulu Sea or Malaysia,” he noted.

Components of the rocket were reportedly seen over Malaysian airspace, moments before the landing trajectory ended in Sulu Sea near Palawan.

Philsa advised the public to immediately inform local authorities about suspected floating debris spotted at sea but warned them against retrieving or coming close as these may contain “remnants of toxic substances such as rocket fuel.”