Cancer is the third leading cause of morbidity and mortality in the Philippines. Two out of 5 Filipinos have been touched by cancer—either through a personal diagnosis—or by a family member, friend, or colleague diagnosed with the disease. A cancer diagnosis can be an overwhelming experience and challenges individuals in ways often hard to imagine. With the passage of the National Integrated Cancer Control Act (NICCA) in 2019, Filipinos are given renewed hope that they won’t have to fight cancer alone.

That is why cancer advocates and health champions appeal to concerned agencies particularly the Department of Health (DOH) to prioritize the signing of the Joint Memorandum Circular that will facilitate the release of the Cancer Assistance Fund (CAF).

According to Senator Ejercito, funding for the cancer law is contingent on the priority it receives from the DOH and the DBM, as well as the amount of funding that remains unused in 2022.

“The NICCA was only given a sufficient budget in 2022. Imagine, that’s two years since its passage,” Senator Ejercito said. “We’re just looking forward to (funding). We’ll have to make sure, with the help of the DBM and DOH, that it’s funded so that we can help a lot of Filipinos who have or are suffering from cancer,” he added.

“Every Filipino deserves a fighting chance against cancer. To sustain NICCA is to sustain the lives of our loved ones,” said Senator Ejercito, principal author and sponsor of the Universal Health Care (UHC) law, the former chairman of the Senate Committee on Health and Demography. “We need funding allocation to push forward and gain tactical advantages in cancer cure and prevention. We are at war fighting the lives of our loved ones.”

Cancer patients choice: do or die

Senator JV Ejercito experienced cancer first-hand when his wife was diagnosed in 2016.

“I remembered during my wife’s treatment, each of her session could range from PhP 70,000 – 100,000. Talagang mahihirapan ang ordinaryong tao. Kasi ako nga talagang nahirapan!” he shared.

Usec. Tina Canda, who herself was a breast cancer survivor, shared one of her observations during a treatment at National Kidney Transplant Institute.

“In 2003, I was diagnosed with breast cancer and had to go to a government hospital because I had no money. It’s an economic problem immediately. In 2016, I was diagnosed with bone cancer. When I was at NKTI, I heard other patients choose between getting treatment or paying for their child’s tuition fee,” Usec. Canda noted.

“There are two questions that a patient always asks, ‘will I live?’ and ‘how much will it cost’? In my case, 13 years ago, all my treatments cost PhP 2.5 million,” he said.

Thus, the immediate release of the CAF is necessary to complement the DOH and PhilHealth cancer assistance programs. In addition, Senator Ejercito raised the sufficiency of medicines at government hospitals given the increase in cancer cases. 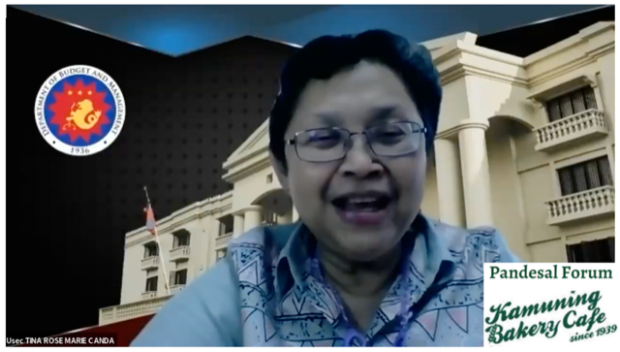 Usec. Canda also emphasized that there are cancer drugs that may contribute to the overall survival of cancer patients but are not included in the Philippine National Formulary (PNF). With this, Canda urged the DOH to take a look at this matter as a way of further improving the state of cancer care in the country.

As the principal author of the cancer law, Senator JV Ejercito promised to push for more funding to support cancer patients.

“We’ll see how the funds were utilized in 2022. If there is enough (left over), then probably we can have the same or probably add a little more. We’ll see how it goes, and we will ask for a report from the DOH and the DBM on utilization in 2022. If it’s not enough, then we’ll have to augment (in the) 2023 budget,” Mr. Ejercito said. “With the help of DBM and DOH, we must ensure that it be funded so we can help a lot of Filipinos who are suffering from cancer prolong their lives.”

Dr. Arnold Uson encouraged cancer patients to seek treatment in some existing government assistance programs such as the PCSO and Malasakit program.

“Do not jump to early conclusions of mortality, go to a hospital where the doctors can help you,” he said.