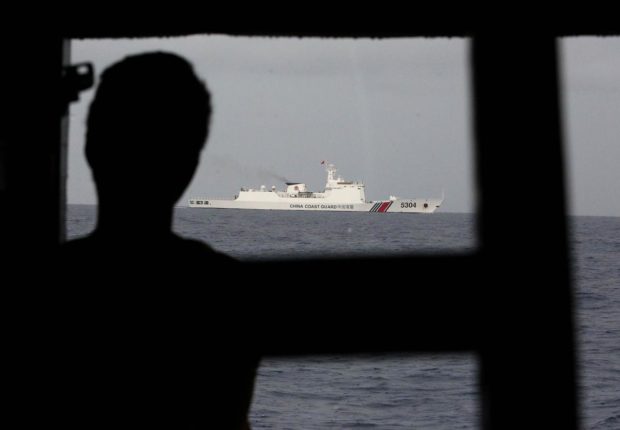 The China Coast Guard ship with bow No. 5304 shadows one of two Philippine Navy boats on a resupply mission to the BRP Sierra Madre at Ayungin Shoal in the West Philippine Sea on June 21, later radioing troops on the rusting warship that they face consequences if they “insist on making trouble.” (MARIANNE BERMUDEZ / Philippine Daily Inquirer)

The incident took place on June 27, or almost a week after the Chinese coast guard warned troops at BRP Sierra Madre of “consequences” if it makes “trouble,” which Philippine authorities construed to refer to the transport of construction and repair materials to the rusty and grounded warship.

Automatic identification system data suggested that the Philippine vessel was “denied access” to Ayungin, which underscored the vulnerability of the BRP Sierra Madre, the Amti wrote in its report on Thursday.

The 60-meter BFAR vessel left Puerto Princesa City on June 26 for the BRP Sierra Madre. As it approached 12 nautical miles (22.22 kilometers) southeast of the shoal in the morning of June 27, the CCG 5304 came south from the northern edge of the shoal to greet it.

The CCG then tailed the Philippine ship at a distance of 500 meters for another hour until the two parted ways 14 nautical miles (25.9 km) east of Ayungin. The BFAR ship continued eastward and returned to Puerto Princesa City, while the CCG headed back to the northern end of the shoal, the report said.

On June 21, nearly a week before the incident, the Inquirer joined a resupply mission to Ayungin where two wooden boats manned by the Navy were warned by the CCG against bringing construction materials. The CCG later warned the troops at BRP Sierra Madre of “consequences” if they insist on “making trouble.”

Ayungin Shoal is a low-tide elevation located 105 nautical miles (194 km) off Palawan and is within the Philippines’ exclusive economic zone. It is one of the nine features occupied by the Philippines in the Spratly Islands.