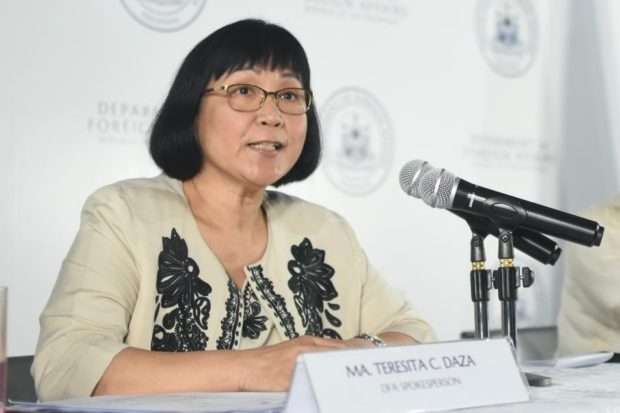 Department of Foreign Affairs Spokesperson Ma. Teresita Daza during the press briefing at the DFA on July 28, 2022. (DFA-OPCD Photo by Philip Adrian Fernandez)

MANILA, Philippines — The country’s former ambassador to Chile, Ma. Teresita Daza, is the new spokesperson for the Department of Foreign Affairs (DFA).

The DFA on Thursday announced that Secretary Enrique Manalo has appointed Daza for the position.

“A veteran career diplomat, the new spokesperson brings a wealth of experience to her position,” it said in a statement. “It has been four years since a DFA Secretary last designated a spokesperson, and 18 years since it last had a female spokesperson.”

Daza, who will be working with DFA’s Office of Public and Cultural Diplomacy, said she was “humbled” to be assigned for the role.

“With the guidance of Secretary Manalo, I hope to assist in the articulation of our country’s position on various foreign policy issues, while keeping the media, especially the DFA Press Corps, abreast with the work of our department,” she added.

Aside from Daza, Manalo has also designated the following for key positions in the DFA:

DFA: All PH embassies, consulates to return to ‘normal’ operations from March 21

Read Next
PLDT, Smart activate more ‘Libreng Tawag, Libreng WiFi’ sites in quake-hit areas
EDITORS' PICK
A laptop that maximizes your WiFi so you can maximize your productivity
Why Tagle is a leading papal contender
In Borongan, nuns play hoops (not mahjong)
Powered by style, innovation and passion
House energy committee chair Arroyo bats for cheap electricity
KWF has no power to ban, censor written works – Lagman
MOST READ
Why Tagle is a leading papal contender
Zubiri on SRA mess: Shameful, disgusting
Gilas gets solid core with Clarkson, Sotto planing in
Arjo Atayde reveals proposal to Maine Mendoza was ‘more than a year’ in the making
Don't miss out on the latest news and information.