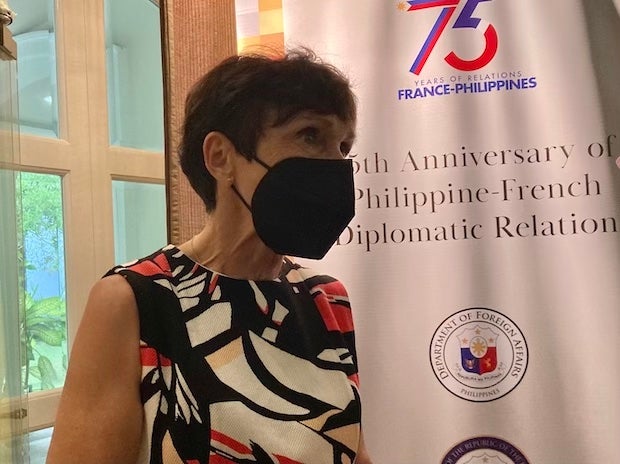 Michele Boccoz, the ambassador of France to the Philippines. (Photo by DANIZA FERNANDEZ / INQUIRER.net)

She was reacting to Marcos’ first State of the Nation Address on Monday, during which he stressed that the Philippines would not give up any part of its territory to any foreign power.

“What we took good note of when listening to the speech is also the very strong position in foreign policy. It’s about mentioning defense and security. It’s one of the areas where we are very much involved, and we continue to be involved,” Boccoz said in a media interview at the French ambassador’s residence.

She pointed out that France has a fleet in the Pacific.

“This is something that we noted: not a square inch of the Philippine territory being given away,” she said.

Boccoz said that France and the Philippines could further develop their cooperation on the matter.

Aside from helping protect Philippine territory, France could work on many areas with the new administration such as energy, infrastructure, and economy, Boccoz said.

“These are areas that we can be a lot more proactive and working a lot more together,” she added.

Also during Marcos’ Sona, he said that the Philippines would be “a friend to all and an enemy to none,” assuring that it would be a “good neighbor” cooperating with other countries.