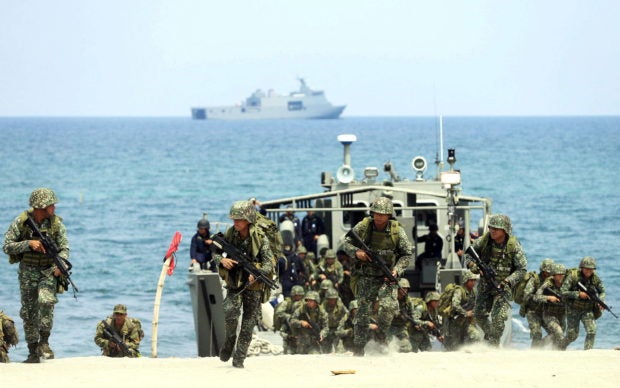 Philippine and American Army officials met last month in Hawaii to draw up plans for a “scaled up” edition next year of “Salaknib,” the annual military exercise aimed at boosting the defense readiness of both sides.

Party list representatives, however, on Monday filed three resolutions seeking to abrogate two of the country’s treaties with the United States, as well as an investigation into the local deployment of American military drones.

Col. Xerxes Trinidad, Philippine Army spokesperson, said in a statement that from June 27 to 30, representatives from their side and the US Army Pacific reviewed the exercise timeline, strategic objectives, area of operations and updated mission statement.

Lt. Gen. Romeo Brawner Jr., Philippine Army chief, earlier said that the joint exercise was a testament to the “long-standing bilateral relations” between both military forces that would contribute to the “pursuit of a common goal of maintaining a free and open Indo-Pacific.”

But even as the country marked Philippine-American Friendship Day on Monday, three party list lawmakers jointly filed resolutions calling for the abrogation of two of the country’s treaties with the United States.

House Resolutions Nos. 18 and 20 sought to abrogate the Visiting Forces Agreement (VFA) and Enhanced Defense Cooperation Agreement (Edca) which, according to the lawmakers, had led to “unbridled US military operations and abuses in the country.”

“We expect these treaties to be used as legal cover for bigger and more flexible deployment of US military troops and assets in the Philippines, especially with the revival of the US pivot to Asia,” they said.

The lawmakers cited cases of alleged abuses committed by American military servicemen against women, children and members of the LGBT (lesbian, gay, bisexual, transgender) community in seeking the VFA’s abrogation.

As for Edca, they said it had transformed the country into a “virtual US military base in the Asia-Pacific region where US armed forces units have practically been given free rein in conducting operations of whatever nature in strategic points inside Philippine territory.”

According to them, Edca “violates Philippine national sovereignty, imperils the geopolitical situation in the West Philippine Sea, and endangers the livelihood of farmers, fisherfolk and indigenous peoples’ communities.”

At the same time, the party list representatives asked the House committee on national defense and security to look into the deployment and operations of US military drones in the country.

Brosas said the military should “report to the public the extent by which these unmanned aerial vehicles (UAVs) are used in military operations, and if the US is controlling these air assets remotely, as it would constitute flagrant violations of our Constitution.”

They noted the 2017 deployment to Mindanao of the Gray Eagle UAV—a high-tech drone which could be armed with missiles—to support government operations against terrorists in Marawi City.

The lawmakers also cited the US military’s turnover of four ScanEagle drones to the Philippine Air Force last year.

“There has been no official record of the operations and missions of the deployed Gray Eagle in Mindanao or that of the recently turned over ScanEagle drones, leading to suspicions that (they) could have been endangering the lives of Filipinos,” they said.

They added that the deployment of UAVs opened the door for another country to directly or indirectly participate in local combat operations which was against the Constitution, saying that the drones might also be used “against the Filipino people.” INQ