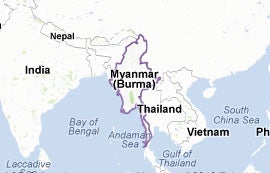 MANILA, Philippines — A group of overseas Filipino workers (OFWs) and expatriates has appealed to the Department of Foreign Affairs (DFA) to downgrade the Alert Level 4 and lift the travel ban on Myanmar to allow them to travel back to the Southeast Asian country.

In a letter dated June 6 and addressed to DFA Secretary Teodoro Locsin Jr., Edwin Tobias, an appointed adviser of the Filipino community in Myanmar, said that due to the COVID-19 pandemic, some OFWs were forced to go back to the Philippines while some opted to stay in Myanmar.

A copy of the letter was obtained by Inquirer.net on Wednesday.

According to Tobias, some of those who went back to the Philippines, but failed to secure jobs that can substantially support their families, have been unable to go back to Myanmar due to the travel ban.

Those who stayed in Myanmar, on the other hand, have not been able to see their families for more than two years now, making them miss important family occasions and traditions, he added.

The group noted that starting April this year, Myanmar has opened its borders to business travelers and other foreign workers are already going back to major areas in Yangon and outside Yangon, albeit slowly.

They also noted that in Yangon, international, private, and government schools have already resumed face-to-face classes while banks, hospitals, and transportation have started going back to normal operations.

“Feeling the effect [of] both the pandemic and economic situations, respective companies have time and again reiterated their request for OFWs to go back to their work in Myanmar, otherwise, they will lose their job and means of income,” the letter read.

The group said the companies have already written letters reiterating the need for OFWs to return to work, “otherwise investors will be forced to replace them.”

“Most OFWs here are skilled workers, teachers, engineers, creatives, managers, and executives of reputable organizations. We understand that as an OFW, we also greatly contribute to the improvement of the Philippine economy,” Tobias pointed out in their letter to the DFA chief.

Based on the letter, a total of 165 OFWs — both in Myanmar (108) and in the Philippines (57) — including signatory Joemar Ubina, have signed the petition appealing to lift the travel ban and downgrade the Alert Level 4 on the Southeast Asian country.

Inquirer.net also learned that as early as November last year, the group of OFWs already sent a letter of appeal to the DFA.

But this was denied, Tobias told this reporter in a phone interview.

“We’re hoping for the best, praying that our situation, our appeal, our petition will finally be granted, or even a positive response,” Tobias said.

In June 2021, the Philippine Overseas Employment Administration issued a temporary ban on the deployment of new hires to Myanmar.

The following month, the DFA raised Alert Level 4 on Myanmar in light of the worsening COVID-19 situation there.

Filipinos in Myanmar urged to leave