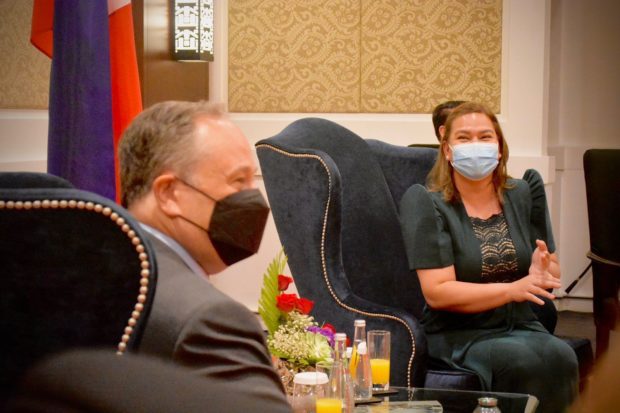 MANILA, Philippines — Vice President-elect Sara Duterte was invited to attend an education-related side event of the United Nations (UN) ahead of its general assembly in September, Manila’s top diplomat to Washington said, adding that she “looks forward” to visiting the United States this year.

“Very, very articulate si vice president in telling the second gentleman (US Second Gentleman Douglas Emhoff) and his party that the relationship is really good and strong and that she looks forward to going to the United States some time this year,” Philippine Ambassador to Washington Jose Romualdez told reporters after delegates from the United States met with Duterte on Wednesday.

“VP Sara was invited for a side event of the United Nations, something to do with education,” he added.

The Vice President was tapped by President-elect Ferdinand “Bongbong” Marcos Jr. to head the Department of Education.

The said event will take place ahead of the UN General Assembly in New York on September 20, according to Romualdez.

“She’ll be there before the assembly…before September 20th,” he said.

Emhoff is accompanied by US Embassy in Manila Charge d’Affaires Heather Variava, and other US delegates, including Fil-Am Congressman Robert “Bobby” Scott.

During the courtesy call, Emhoff congratulated Duterte for her “overwhelming victory” in the 2022 vice presidential race as well as her role as incoming DepEd chief.

“They exchanged views on issues of mutual interest, especially education and the importance of youth engagement in politics and women in leadership,” the DFA said in a short statement.

“The Vice President-elect is expected to continue her engagement with the US on the education front during planned visits to Washington DC and New York in September 2022,” it added.

Also part of the delegation were the former vice chairman of the Joint Chiefs of Staff, retired Admiral Sandy Winnefeld; US National Security Council Senior Director Edgard Kagan; and US Executive Director to the Asian Development Bank Chantale Wong.

They “underscored their commitment to strengthening” relations between Manila and Washington.