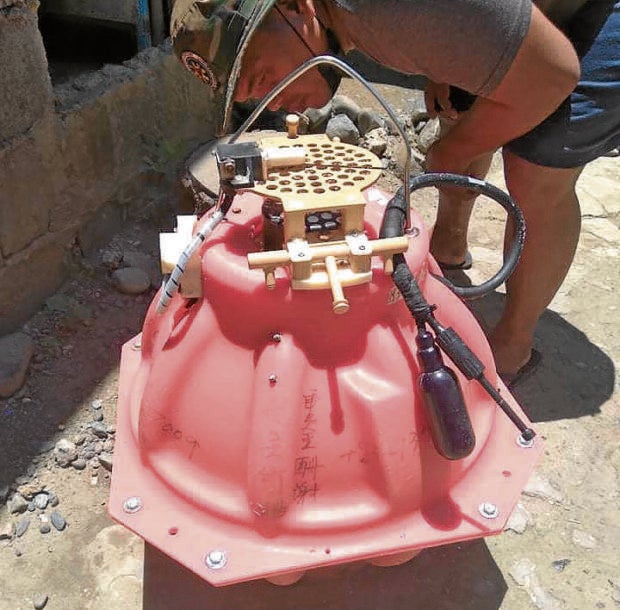 UNUSUAL FIND Fishermen found an ocean bottom seismometer, or OBS, in a recent trip to the West Philippine Sea, about 239 kilometers northwest of Infanta, Pangasinan. The equipment, bearing Chinese characters and used in oil exploration, was recovered within the country’s exclusive economic zone. —CONTRIBUTED PHOTO

MANILA, Philippines — An alliance of fisherfolk on Monday urged President-elect Ferdinand “Bongbong” Marcos Jr. to “completely shelve” joint oil exploration talks with China, and focus instead on asserting the country’s sovereignty over the West Philippine Sea.

This came after China expressed its interest in reviving negotiations on joint oil exploration with the newly elected Philippine government, saying it could help settle the differences of both countries over the disputed body of water.

“For starters, President-elect Marcos Jr. should issue a public statement completely shelving the joint oil exploration and that no negotiations in connection to this matter would ever proceed,” Fernando Hicap, National Chairperson of the Pambansang Lakas ng Kilusang Mamamalakaya ng Pilipinas (Pamalakaya), said in a statement.

He further noted, “We attest that this joint venture will institutionalize and intensify the Chinese plunder of our marine resources. Everyone has witnessed how China blatantly disregards our legal and political rights over the West Philippine Sea amid an international ruling that invalidated its claim. Given this situation, China allowing us to get our fair share from this joint venture is improbable.”

Hicap also stressed anew that the country does not need the assistance of foreign countries to “explore and make use of our natural resources.”

“We have overwhelming intellectual human resources for this industry that the past administrations had chosen to neglect and de-industrialize,” he added.

Pamalakaya, however, remarked that this “will not acquit Duterte from his criminal neglect in protecting our territorial waters and Filipino fishers against foreign intrusion.”

Duterte recently urged the Filipino people to assert their rights over the West Philippine Sea and yet, in 2021, he called the arbitral ruling against China merely a “piece of paper.”

Next NICA chief: ‘We have to give focus on West Philippine Sea’