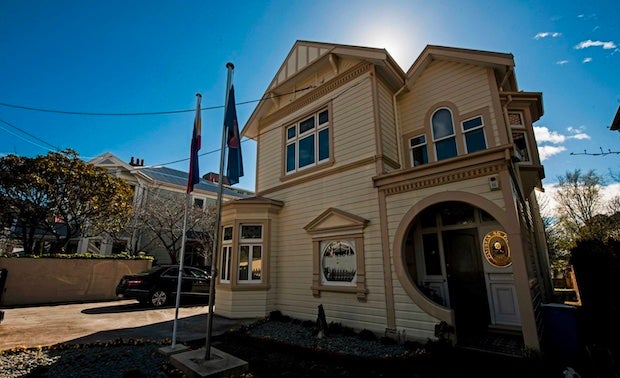 The Philippine Embassy in Wellington, New Zealand. (Photo from the Department of Foreign Affairs)

MANILA, Philippines — Five Filipinos were among those who died in a crash in New Zealand over the weekend, the Philippine Embassy in Wellington confirmed Tuesday.

“The Embassy was shocked and deeply saddened by this tragedy befalling our Kababayan. On behalf of the Philippine Government, the Embassy offers its prayers and condolences to the family and friends of the victims,” the embassy said in a statement.

“In the morning of Sunday, June 19, the Embassy was informed promptly by New Zealand Interpol of the fatal crash that occurred along State Highway I, Mount Pleasant in Marlborough. Seven persons were killed, while two survived, one of them sustaining grave injuries. The two survivors, and five of the fatalities, are Filipinos,” it added.

The family was aboard a van when it collided with a truck Sunday morning, according to an earlier report.

The embassy said it had been in constant touch with local police and other authorities since the accident happened.

Embassy officials have also visited the two survivors at the Wellington Regional Hospital to “offer help and consolation.”

“The Embassy is coordinating with DFA [Department of Foreign Affairs] Headquarters as to the needs of the victims and their family,” it added.

“The devastating news has shaken New Zealand as a nation, especially the local Filipino community. The Embassy reiterates its assurances of its readiness to assist,” the embassy further said.

It also appealed for privacy for the survivors and the family of the fatalities who are “at present in a most vulnerable predicament.”

“The survivors and the family of the victims are at present in a most vulnerable predicament. The Embassy therefore appeals to their friends and supporters to understand their plight and to respect their privacy,” the embassy said.