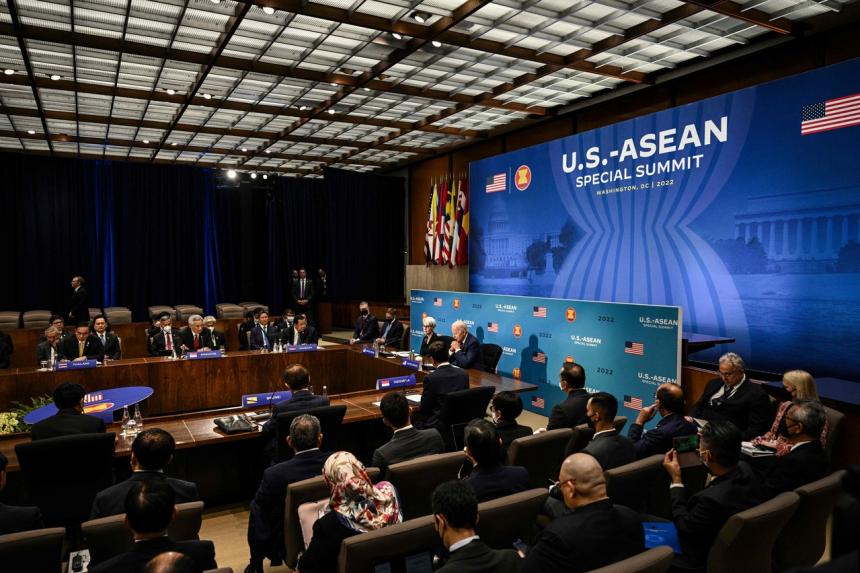 US President Joe Biden meeting with Asean leaders at the US-Asean special summit in Washington DC on May 13, 2022. AFP file photo

MANILA, Philippines — The recently concluded United States (US)-Asean Special Summit is also an assurance that US President Joe Biden’s administration is not overly focused on the Ukraine issue, a senior official of the US government told Southeast Asian reporters on Tuesday.

According to Senior Director for East Asia and Oceania on the National Security Council (NSC) Edgard Kagan, who also functions as a Special Assistant to the President, Biden sees the need to continue with the programs it initiated during the start of his term — including strengthening ties between US and Indo-Pacific countries.

The US-Asean Special Summit is proof of which, Kagan said, as Biden ensured that he will be attending key events despite having a tight schedule.

“I’d also point out that well, this is happening in a time when there are tremendous demands on the president’s time, and maybe on the other senior officials in the administration, and obviously Ukraine’s first and foremost there.  But I think the president is very, very committed to the idea that we can’t allow ourselves to be overly-focused on Ukraine,” Kagan said in a phone teleconference.

“The administration needs to continue doing what it laid out from the very beginning of its time in office in terms of really focusing on the Indo-Pacific and expanding and strengthening our position and our relations in the Indo-Pacific,” he added.

Kagan said that Southeast Asia remains a critical area for the US, which leads the global superpower to strengthen its ties with the Asean countries.

“I think the president very much sees Asean as a critical aspect of this […] I think with his further engagements with leaders from Southeast Asia, with other leaders from the region all reinforced this view that this is a critical place for the US in terms of how we strengthen our relationship with them — long-standing partners, allies, countries who all are extremely important to the United States,” he said.

Ukraine last February 2022 was the subject of special military operations from Russia, which saw large military units entering its eastern borders.  Several countries including the US have condemned Russia’s actions, but hostilities have not completely stopped months since it started.

Despite clarifying the US stand on Ukraine, US Assistant Secretary of State for the Bureau of East Asian and Pacific Affairs Daniel Kritenbrink also noted that in the Joint Vision Statement, US and Asean leaders called for the respect of Ukraine’s sovereignty amid Russian aggression.

“Our joint vision statement also reaffirms our mutual respect for the sovereignty, territorial integrity, and political independence of Ukraine, as well as our deep concern over the crisis in Burma,” Kritenbrink told reporters.

“The leaders discussed their shared commitment to the rules-based international order that we have all depended on to grow our economies and our societies.  The leaders also discussed Russia’s continued assault on Ukraine’s people, and the country’s sovereignty and territorial integrity,” he added.

READ: US, Asean to upgrade ties; Singapore PM says this shows US values its partnership with Asean

“There were many initiatives that we announced, as we outlined in our factsheet […] and that factsheet and its deliverables were all aimed at deepening relations with a strengthened and empowered Asean.  The $150 million in new regional initiatives that we announced is of course in addition to the $12.1 billion in development, economic, health, and security assistance, and over $1.4 billion in humanitarian assistance that we have provided to Southeast Asia since 2002,” he added.

The Asean Special Summit was held last May 11 to 13, which was attended by most Asean leaders.  President Rodrigo Duterte opted not to attend the summit, stressing that he did not want to preempt the foreign policy of the next president.

Russia hit with new round of US sanctions