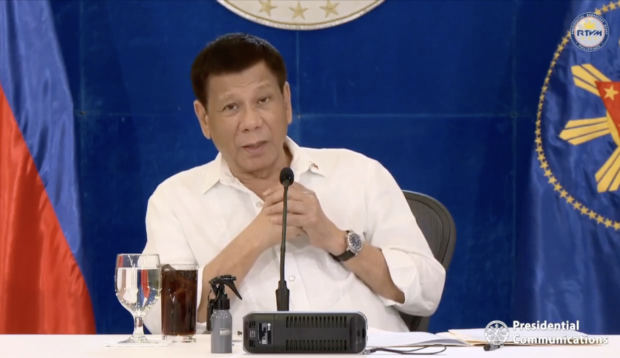 President Rodrigo Duterte in his Talk to the People address

MANILA, Philippines — President Rodrigo Duterte has declined an invitation from the United States to attend the leaders’ special summit that the Philippines’ greatest military and economic ally is hosting for Southeast Asian countries from May 11 to 13.

In his Talk to the People briefing that aired Wednesday morning, Duterte said he recently sent Executive Secretary Salvador Medialdea and Defense Secretary Delfin Lorenzana to the US to talk with their counterparts about several issues, one of which was the US special summit in which Duterte had been invited to.

Duterte, in turning down the invitation, said he would not want to unduly contradict his successor’s views and opinions on certain issues, among them the interlocking and overlapping claims on the South China Sea, which is being claimed wholly by China.

READ: US to host Asean leaders in mid-May

Duterte claimed that as the conference was to be held right after the May 9 elections, it was possible that there would already be a new president waiting in the wings.

He said it may not appear good that an outgoing president is still meddling in the affairs of the country, especially if there is already a new president by then.

Duterte also stressed that he might be asked to be part of any agreements during the meet, which may not be acceptable to the president-elect by that time.

“And besides, if it is a working conference, there might be some agreements or commitments that will be made there, and ang mahirap kasi kung ako ang nandoon, I might take a stand that would not be acceptable to the next administration,” he explained.

According to a statement posted on the Asean website, incumbent chair Cambodia invited member-states to celebrate the 45 years of Asean-US dialogues.

“As the Chair of ASEAN, Cambodia wishes to announce that ASEAN and the United States are set to convene a Special Summit to celebrate four and a half decades of the ASEAN-U.S. Dialogue Relations, on 12-13 May 2022, in Washington D.C. This is the second Special Summit since 2016 and the first in person engagement for our leaders since 2017,” Asean said.

“ASEAN Leaders and President Joe Biden will meet to discuss ways and means to intensify cooperation in various areas, including COVID-19 response and global health security, climate change, sustainable development, maritime cooperation, human capital development, education and people-to-people ties, as well as connectivity and economic engagement. They will also exchange views on regional and international issues of common interest and concern,” it added.