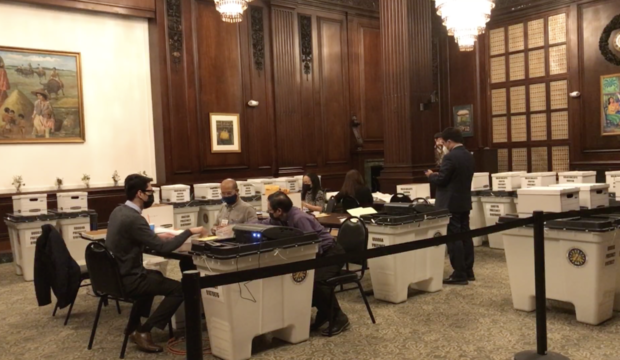 MANILA, Philippines — The staff members of the Philippine Consulate General in New York are working overtime to keep up with its scheduled ballot feeding after three vote counting machines (VCMs) earlier malfunctioned and caused a slight delay.

Philippine Consul General Elmer Cato on Wednesday said ballot feeding in the consulate has completely resumed after three of the four VCMs designated to the post earlier experienced technical issues, prompting them to suspend the activity.

“This morning, we actually sent our staff to go to Washington para humiram ng isang VCM dahil kailangan namin dito dalawa [to borrow one VCM because we need two here],” Cato told Teleradyo in an interview.

But before the staff member reached Washington, the consulate was able to successfully troubleshoot two of the three VCMs that earlier malfunctioned.

This means that the consulate now has three usable VCMs, with one serving as a standby machine.

“Nagkaroon lang ng delay…kailangan maghabol kami ngayon [There was a delay…we need to catch up],” Cato said, but expressed confidence that the consulate will be able to feed ballots as scheduled.

Posted by Philippine Consulate General in New York on Tuesday, May 3, 2022

(It was only a slight delay but our personnel are willing to work overtime just to be able to catch up because there are a lot of ballots coming in everyday, either by mail or those being dropped off in person at the consulate.)

Cato meanwhile noted the number of ballots either being mailed back or dropped off at the consulate.

(According to our personnel at the Philippine Center who who have been here in previous elections, their observations is there are more Filipinos participating now because everyday, the ballot receptacle in the lobby is full, they did not see this in the previous election.)