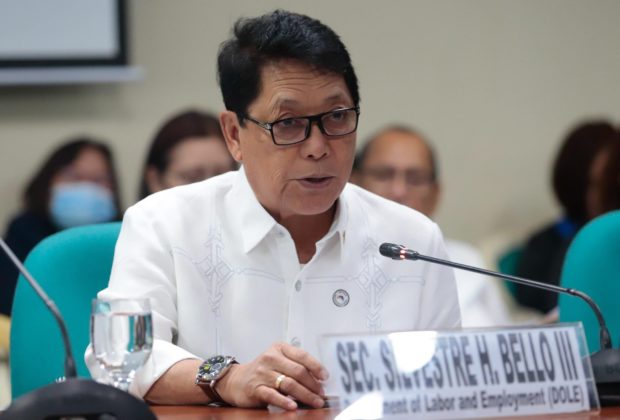 (I issued a notice to the public yesterday not to believe the directive lifting the suspension of deployment of new hires to Saudi Arabia.)

Mama-o earlier issued a department order lifting the Saudi deployment ban to serve “the national interest and the interests of OFWs (overseas Filipino workers) as well as the recruitment industry.”

But Bello said the DMW has yet to be fully constituted, citing the law that created the new department.

(That’s beyond their powers. The law is clear.  The Department of Migrant Workers will be duly constituted after an IRR is crafted, a budget has been allocated and if there is already a staffing pattern. If you have not yet met those three conditions, the new department is not yet constituted, that is clear in the law.)

This means the DMW secretary cannot yet impose such policies, Bello said in the notice to the public DOLE issued on Wednesday.

This is not the first time that Mama-o’s directive was questioned.

Earlier this month, Mama-o recommended the recall of the appointment of Philippine Overseas Employment Administration (POEA) officials, saying that the agency would have to be dissolved with its merger with other agencies to form the DMW.

Executive Secretary Salvadro Medialdea said Malacañang could not “favorably” act on Mama-o’s recommendation since the DMW has not yet been constituted.

“Considering that the DMW has not been constituted yet, it follows that the government entities or agencies enumerated in Section 19 of RA 11641 shall continue to exist separately and perform their respective mandates until DMW is constituted,” Medialdea had said.