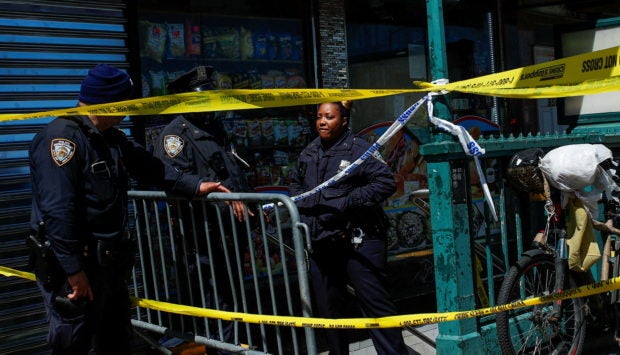 Law enforcement officers stand guard at the scene of a shooting at a subway station in the Brooklyn borough of New York City, New York, U.S., April 12, 2022. (REUTERS)

MANILA, Philippines — No Filipino was reported injured in the shooting incident at a subway station in Brooklyn, the Philippine Consulate General in New York said Thursday.

“The New York City Police Department has just informed [the consulate]  that there are no Filipinos among the at least 29 people who were reported injured in the mass shooting on the N train in Brooklyn on Tuesday morning,” Consul General Elmer Cato said on social media.

The New York City Police Department has just informed @PHinNewYork that there are no Filipinos among the at least 29 people who were reported injured in the mass shooting on the N train in Brooklyn on Tuesday morning. @DFAPHL @teddyboylocsin pic.twitter.com/iLEX0QIQT6

A man earlier set off two smoke bombs at a packed subway train in Brooklyn and opened fire on commuters.

The suspect, identified by police as Frank James, was arrested 30 hours after the attack.

He was charged with a single count committing a terrorist or other violent attack against a mass transportation system and officials said he could face life imprisonment if convicted, according to a Reuters report.