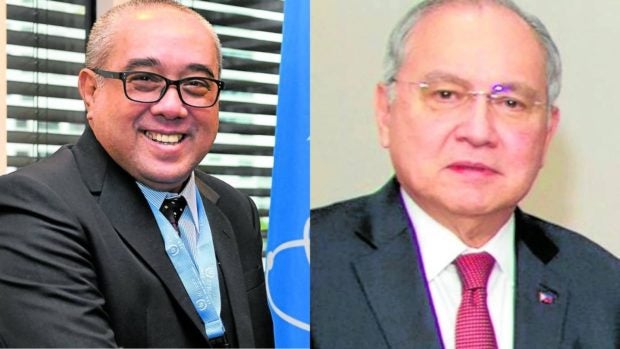 Carlo Arcilla and Jose Manuel Romualdez (Photos from the National Institute of Gelological Sciens and the US Embassay, respectively)

MANILA, Philippines — The Philippines and the United States have agreed to strengthen their “strategic civil nuclear cooperation” to improve the country’s energy security and other nonmilitary uses of nuclear power under a memorandum of understanding (MOU), the Department of Energy (DOE) said on Saturday.

It also comes in the wake of Russia’s invasion of Ukraine which has triggered a global hike in oil prices and their expected impact on energy rates.

The MOU was signed last week by Energy Undersecretary Gerardo Erguiza and Undersecretary of State for Arms Control and International Security Bonnie Jenkins at the Department of State in Washington and witnessed by Jose Manuel Romualdez, the Philippine ambassador to the United States.

“To ensure a resilient, inclusive, and green economic growth for the Philippines, we need to intensify our work in securing reliable and sustainable energy sources, including nuclear energy,” Romualdez said. “Through our cooperation, we hope to ensure the peaceful use of nuclear energy and fulfill our decarbonization goals.”

Erguiza said the DOE would be intensifying its collaboration with the United States through various technical assistance to expand the country’s knowledge and understanding of nuclear infrastructure.

The DOE is also starting a feasibility study to determine the viability of using small modular reactors (SMRs) at certain places in the country.

SMRs could be a good alternative source of power in off-grid areas, although its commercial deployment has yet to be backed by research, according to the DOE.SMRs are nuclear fission reactors that are smaller than conventional reactors and thus have greater scalability. SMRs can be built in a factory and then transported to a site for installation.

According to the International Atomic Energy Agency, the United Nations watchdog on the peaceful use of nuclear power, SMRs produce a maximum of 300 megawatts of electricity.

The United States is one of the leading developers of SMRs in the world and could help the Philippines formulate regulations on their construction and use, said Carlo Arcilla, director of the Philippine Nuclear Research Institute (PNRI).

“In the US, nuclear power plants are privately owned but their regulators there are strong, so we can somehow replicate that kind of model they have there,” he told the Inquirer in a phone interview.

Arcilla explained that the MOU, which the PNRI reviewed last year, would also cover other aspects of nuclear power such as its use in medicine, agriculture and water resources, and in educating Filipino nuclear experts.

He said, however, that research and development of nuclear weapons were excluded from the MOU because of the Constitutional ban on such weapons on Philippine territory.

The PNRI is supposed to be the country’s nuclear power regulator, but since there was no national policy on nuclear energy before EO 164, Arcilla said the agency had been conducting studies on the application of nuclear energy to health care and agriculture.

Up to next president

He said he was hoping that Duterte’s successor would continue the national policy on nuclear power and all its peaceful aspects initiated by the president.

Arcilla said the MOU could continue even if the new president would repeal Duterte’s EO as the partnership between the two countries could focus on other uses of nuclear energy such as in medicine and in agriculture.

“This is not just about energy at all, but the policy by the president would most certainly help us boost our developments of these researches and possible breakthroughs,” he said.

After she took office following the ouster of dictator Ferdinand Marcos in 1986, President Corazon Aquino mothballed the corruption-tainted BNPP out of safety concerns.

Her economic planning secretary then, Solita Monsod, said in two recent columns in the Inquirer that the nuclear plant built by Westinghouse in Morong, Bataan, could now be refurbished and operated.

Aside from its relatively smaller operating costs compared to coal- and oil-fired plants, the BNPP is capable of generating 620 megawatts that can be used to augment the country’s thinning power supply, she said.