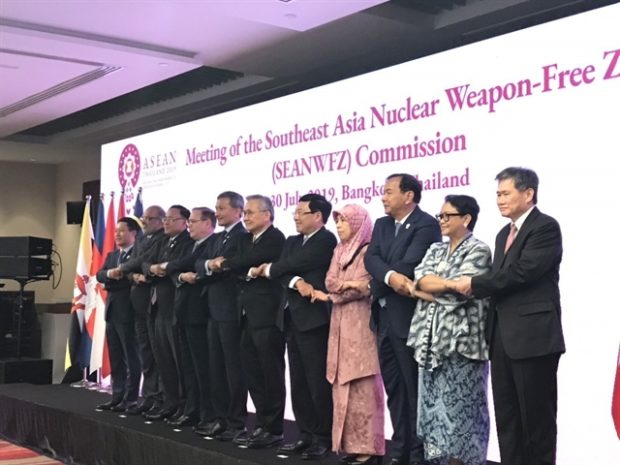 Minh was in the Thai capital to attend the Meeting of the Southeast Asia Nuclear Weapon-Free Zone (SEANWFZ) Commission, as part of the 52nd Asean Foreign Ministers’ Meeting (AMM-52) and related meetings, which runs from July 29 to August 3.

In his remarks at the meeting, the Vietnamese Deputy PM highlighted the commission’s significant role in ensuring the absence of nuclear arms and weapons of mass destruction in the region.

Minh said he wants Asean to improve capacity and preparedness to prevent and respond to radiation emergencies, calling for strengthened coordination among specialized agencies in nuclear power and in disaster relief and response in the region.

At the same time, Asean needs to heighten the SEANWFZ’s role and contributions to international efforts in preventing the proliferation of nuclear weapons and weapons of mass destruction and pursuing nuclear disarmament, he told the meeting.

Minh called for greater efforts from Asean to remove barriers in order to enable five states with nuclear weapons to sign the Protocol to the SEANWFZ Treaty.

During the meeting, the Asean countries affirmed the significance of the SEANWFZ Treaty and expressed desire and determination to keep Southeast Asia free of nuclear arms and all other weapons of mass destruction.

They agreed to step up efforts to implement the Plan of Action to Strengthen the Implementation of the SEANWFZ Treaty from 2018-20.

The states will comply with the undertakings in the SEANWFZ Treaty by promoting the universalization of international agreements related to disarmament and non-proliferation of weapons of mass destruction, cooperating in ensuring nuclear security and safety, and using nuclear power for peaceful purposes.

Asean members will continue consultations with the five states with nuclear weapons on joining the Protocol to the SEANWFZ Treaty to assure these states agree to respect the nuclear weapon-free Southeast Asia.

They will foster cooperation with the International Atomic Energy Agency (IAEA) and other international bodies with relevant resources and expertise to seek their support for the implementation of the provisions of the SEANWFZ Treaty and promote the SEANWFZ’s position in the world stage, particularly in the United Nations.

They will push forward the signing of a cooperation agreement between the ASEAN Network of Regulatory Bodies on Atomic Energy (ASEANTOM) and IAEA in September and encourage concerned bodies in Asean to take part in the implementation of the treaty’s provisions.