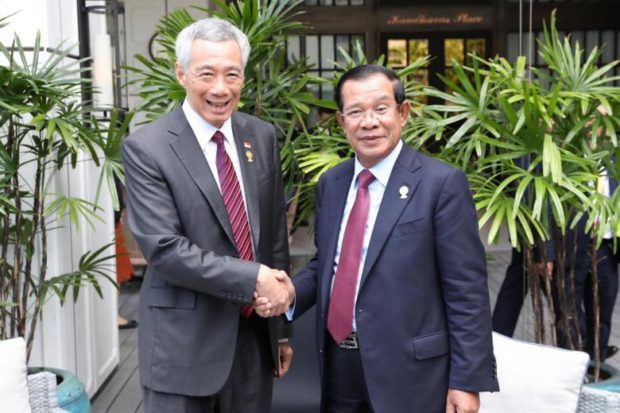 A photo from June 23, 2019, shows Prime Minister Lee Hsien Loong (left) and Cambodian Prime Minister Hun Sen on the sidelines of the Asean Summit in Bangkok. PHOTO: MINISTRY OF COMMUNICATIONS AND INFORMATION via The Straits Times/Asia News Network

SINGAPORE – Prime Minister Lee Hsien Loong has stressed that the Asean chairman needs to engage with all parties concerned about the crisis in Myanmar.

He made the point after receiving a video call from his Cambodian counterpart, Mr Hun Sen, on Friday (Jan 14). Cambodia is the current Asean chair under the bloc’s rotating arrangement and Mr Hun Sen has just returned from a trip to Myanmar where he held talks with junta chief, Senior General Min Aung Hlaing.

Mr Lee, who reaffirmed Singapore’s support for Cambodia’s Asean chairmanship and thanked Mr Hun Sen for the briefing on his recent trip, noted that “there had not been any significant progress” in the implementation of the Asean roadmap adopted in April on Myanmar.

Until there was significant progress, Asean should stick to the decision by its leaders in October last year to only invite a “non-political representative” from Myanmar to its meetings, said PM Lee.

“Any discussion to revise the Asean Leaders’ decision had to be based on new facts,” Mr Lee was quoted as saying in a Ministry of Foreign Affairs (MFA) statement released on Saturday.

Since seizing power on Feb 1 last year, the Myanmar military has had to contend with increasing opposition, which has morphed into armed resistance in various parts of the country. Reports say the military, called the Tatmadaw in the local language, has responded with an iron fist to opponents with tactics that have included aerial bombardments.

Asean’s roadmap for Myanmar known as the “Five-Point Consensus” calls for an immediate cessation of violence, the provision of humanitarian aid, constructive dialogue among all parties concerned which an Asean special envoy would help facilitate.

But the junta has dragged its feet on key points of the road map. It has promised to hold fresh elections by August next year but has jailed thousands of its critics and political opponents, including state counsellor Aung San Suu Kyi whose National League for Democracy party won the last election by a landslide in 2020, less than three months before the coup.

Mr Hun Sen spoke to Indonesian President Joko Widodo prior to his visit last week to Myanmar but it is not clear to what extent he consulted with other Asean leaders about the trip.

The Cambodian premier did not ask to see Ms Suu Kyi during his visit. After his meeting with Gen Min Aung Hlaing, Cambodia’s foreign ministry issued a joint press release stating that the junta would extend the expiry date of its earlier declared ceasefire with ethnic armed organizations from next month to the end of this year. The statement made no mention of the numerous “people’s defense forces” waging an insurgency against the Tatmadaw.

“Prime Minister Lee emphasized the need for the Asean Chair to engage all parties concerned, including the Tatmadaw and the National League for Democracy,” said the MFA statement.

“The Tatmadaw had proposed a ceasefire with Ethnic Armed Organizations (EAOs) only but the call for a cessation of violence in the Five-Point Consensus referred also, and indeed primarily, to violence against the Tatmadaw’s political opponents and civilians,” said the statement.

“Prime Minister Lee noted that just days after Prime Minister Hun Sen’s visit, there had been further attacks by the Tatmadaw against its political opponents, and additional prison sentences imposed on State Counsellor Aung San Suu Kyi,” it added.

The statement disclosed that Mr Hun Sen made some proposals on how to coordinate a ceasefire in Myanmar and deliver humanitarian assistance to its people but Mr Lee was “unsure what role Asean or the Asean Chair’s Special Envoy on Myanmar could play in coordinating a ceasefire since we did not even have access to all parties.”

Singapore had no in-principle objections to such a mechanism if it could foster an end to violence, and Mr Lee said there was a need for progress on the delivery of humanitarian aid, the statement said.

Mr Lee agreed that the proposals raised by Cambodia should be further discussed among Asean foreign ministers and senior officials.

“Prime Minister Lee hoped that Cambodia would consider his views and those of other Asean Leaders,” said the MFA statement which concluded with Mr Lee reaffirming Singapore’s commitment to work with Cambodia and other Asean members on the full implementation of the bloc’s “Five-Point Consensus” as well as relevant Asean decisions.

Cambodia has postponed Tuesday’s Asean foreign ministers meeting, during which the appointment of  its foreign minister Prak Sokhon as Asean special envoy on Myanmar was due to be formalized.