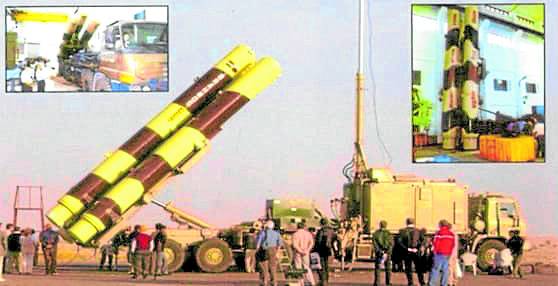 FASTEST CRUISE MISSILE The BrahMos missile, which has a range of more than 400 km and a speed of Mach 2.8, is shown on a mobile launcher. —PHOTO FROM FACEBOOK PAGE OF DELFIN LORENZANA

MANILA, Philippines — The government has awarded a $374-million (P19 billion) contract to India to equip the Philippine Navy with the world’s fastest supersonic cruise missiles.

In a Facebook post on Friday, Defense Secretary Delfin Lorenzana said he signed on Dec. 31 the notice of award to BrahMos Aerospace Private Ltd., an Indian-Russian aerospace and defense joint venture.

The company’s name BrahMos is a portmanteau formed from the names of two rivers, the Brahmaputra in India and the Moskva in Russia.

The project, which was negotiated with the Indian government, includes the delivery of three batteries of BrahMos missiles, training for operators and maintainers, as well as the necessary integrated logistics support package.

The awarding of the contract came just days after the Department of Budget and Management issued two special allotment release orders amounting to P2.83 billion on Dec. 27, as initial downpayment covering 15 percent of the total contract price.

The Philippine Navy Shore-Based Anti-Ship Missile Acquisition Project was part of the second horizon (2018 to 2022) of the Revised Armed Forces of the Philippines Modernization Program.

The BrahMos missile carries a 300-kilogram semi-armor piercing warhead, which can penetrate and damage even the toughest ship hulls.

It has a maximum range of more than 400 kilometers and a velocity of Mach 2.8 (about thrice the speed of sound), which is currently the world’s fastest cruise missile. BrahMos is currently developing a much faster hypersonic missile, with a range of 600 km and speed of Mach 8.

According to Collin Koh, a research fellow at the S. Rajaratnam School of International Studies of the Singapore Nanyang Technological University, the Philippines would be the third in Southeast Asia (SEA) to be equipped with supersonic antiship missile system.

Indonesia has the ship-based Russian Yakhont while Vietnam has the land-based variant of Bastion-P.

Koh said the sale of BrahMos missiles to the Philippines “heralds the eventual hurdling of initial policy difficulties in exporting the BrahMos,” especially to other SEA countries.