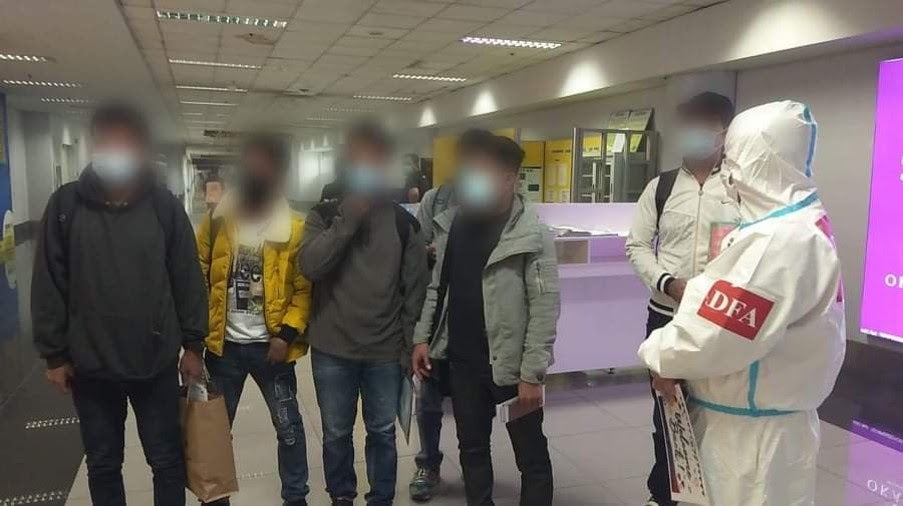 Filipino seafarers welcomed by the DFA Team upon their arrival at NAIA. (DFA- OUMWA Photo)

MANILA, Philippines — Six Filipino seafarers who were stranded at sea since early this year are now back in the Philippines, the Department of Foreign Affairs (DFA) said.

In a statement Friday, the DFA said the repatriated seafarers arrived Thursday morning at the Ninoy Aquino International Airport from Shanghai.

The seafarers were among the 29 Filipinos onboard the Chinese-flagged vessels Han Rong 362, 366, and 369, which ceased operations in May 2021, according to the DFA.

The DFA said the Office of the Undersecretary for Migrant Workers Affairs has monitored the case since receiving a report on the seafarers’ plight and has extended assistance to the crew.

The Philippine Consulates General in Shanghai, Xiamen, and Guangzhou attended to the needs of the seafarers and made representations with the ships’ principal and Chinese authorities for their disembarkation, the DFA added.

“The DFA has been working on their repatriation since their case came to light. Notwithstanding the challenges along the way, we finally brought home the six of them,” said DFA Undersecretary for Migrant Workers Affairs Sarah Lou Arriola.

“We will definitely bring home the rest of the Han Rong fishers still in China,” she added.

Arriola said that DFA is organizing a chartered flight in Shanghai this month.

“We recognize the clamor from Filipinos across China, so we are mounting one for the holidays,” she added.