Omicron variant a warning against under-vaccination in Asia 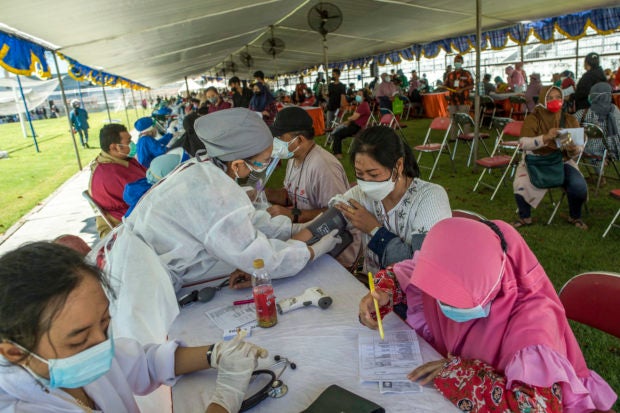 WASHINGTON — The emergence of the Omicron variant of the coronavirus underscores the price of vaccine inequity.

Across Africa, just 10.4 per cent of the population has received one dose of a vaccine. In contrast, 64 per cent in North America and 62 per cent in Europe are fully vaccinated.

While variants can occur anywhere, a large unvaccinated population creates conditions conducive to the emergence of a variant such as Omicron.

Vaccine inequity reflects commercial and geopolitical realities. African epidemiologists and analysts are bitter at the neglect of their continent. But the emergence of Omicron is also a lesson to Asia not to make the same mistake of leaving large populations under-vaccinated.

READ: The cost of delayed vaccination

Myanmar is one area of concern; the country is in conflict, with the economy sinking and a full vaccination rate of less than 20 percent. Indonesia and India are also concerning, experts say.

According to The New York Times’ world vaccination tracker, 32 percent of India’s population is fully vaccinated. The figure for Indonesia is 35 percent, and 19 percent for Myanmar.

Indian Prime Minister Narendra Modi “claims an enormous vaccination rate, but it is mostly with the Indian-made product that has not been put to the test in real terms”, she said.

China and India rely on their home-grown vaccines, directed against the original strain that was identified in Wuhan, China, she said. In contrast, Indonesia relies on a mix of purchased and donated vaccines – “a hodgepodge from all over the world” – with little infrastructure for getting it out to distant island populations, she added.

The shortage of vaccines in much of Africa is artificial, said Dr Mohga Kamal-Yanni, adviser to the People’s Vaccine Alliance – a coalition of organizations and activists.

If, in early 2021, rich countries like Britain had pressured pharmaceutical companies to share know-how and technology with the system that the World Health Organisation (WHO) set up to enable quality companies in the south – including India, Indonesia and others – to make vaccines, there would be plenty of doses for everybody by now, Dr Kamal-Yanni said.

But countries were left at the mercy of pharmaceutical companies.

The emergence of the Omicron variant was not unexpected, she told The Straits Times.

“But this was not an inevitable situation” she said. “I am surprised every day by the vaccination map of the world. Africa is like the forgotten continent.”

According to Our World in Data, a project at Oxford University, wealthy countries had delivered just 14 percent of the 1.7 billion doses promised to low- and middle-income countries by September 2022.

Dr Richard Hatchett, CEO of CEPI, a global partnership trying to accelerate vaccine production and distribution, said: “The emergence of the Omicron variant has fulfilled, in a precise way, the predictions of the scientists who warned that the elevated transmission of the virus in areas with limited access to vaccine would speed its evolution.”

“Having fully vaccinated less than a quarter of their populations, Botswana and South Africa provided a fertile environment for such evolution. The virus is a ruthless opportunist, and the inequity that has characterised the global response has now come home to roost,” he told the WHO this week.

“What is going on right now is inevitable,” Dr Ayoade Alakija, co-chair of the Africa Vaccine Delivery Alliance, told the BBC. “It’s a result of the world’s failure to vaccinate in an equitable, urgent and speedy manner. It is a result of hoarding by high-income countries of the world.”

Separately, in the British Medical Journal last week, Dr Ayoade warned : “Unless we address the inequity in global health, the world will not be prepared for the next pandemic and neither will we be able to exit this current cycle.”

Vaccine diplomacy may help – but dumping vaccines may not. Some countries – like South Africa – are not short on vaccines. But many countries lack the capacity to roll them out to their populations. Vaccines need specific refrigeration conditions, and even specific syringes.

“The syringes are just as important as the vaccines,” Dr Eric Feigl-Ding, a public health expert and Senior Fellow at the Federation of American Scientists,  told ST. He cited a case in which the Philippines “ran out of syringes”.

“These are the inequities, and it is frustrating,” he said. “If we’re all on one ship, one planet, and there are leaks and we can’t really separate our borders – because you’re never going to stop international travel – you just need one hole that will continue to flood the ship with more and more water. That is why we have to patch all the holes, all the gaps.”

On Monday, Chinese President Xi Jinping pledged to donate 600 million doses – and send 1,500 health experts – to Africa. China will supply one billion doses in all, with 400 million through other routes, such as production by Chinese companies in Africa.

“We need to put people and their lives first, be guided by science, support waiving intellectual property rights on Covid-19 vaccines, and truly ensure the accessibility and affordability of vaccines in Africa to bridge the immunisation gap,” Mr Xi told the Forum on China-Africa Cooperation, hosted by Senegal.

Earlier, in September, US President Joe Biden pledged 1.1 billion doses through next year for other countries.

The battle over intellectual property rights with regard to vaccines is also heating up amid stalled negotiations at the World Trade Organisation (WTO) over temporarily waiving the Trade-Related Intellectual Property Rights agreement for vaccines. “The major blockers are Germany, Switzerland and the UK,” Dr Kamal-Yanni said. A WTO ministerial meeting, set for this week in Geneva, has been postponed.

Nursing unions, representing over 2.5 million healthcare workers globally, launched a petition this week on the issue, which, if it collects 100,000 signatures, will reach the United Nations Human Rights Council.

“The World Trade Organisation is considering a proposal that would help end the pandemic,” Global Nurses United and Progressive International said on the petition website. “This would temporarily waive patent protections on vaccine recipes. But the European Union, the United Kingdom, Switzerland, Norway and Singapore are blocking it, endangering millions of lives around the world.”

High-income countries have procured upwards of seven billion confirmed vaccine doses, while low-income nations have been able to procure only approximately 300 million doses, the letter said.

“This unequal distribution of vaccines is not only grossly unjust for the people in low- and moderate-income countries, who remain at high risk of contracting and further transmitting Covid-19, it also provides for the possibility for the development of new variants, some of which may be resistant to the current available vaccines,” the unions from 28 countries warned.