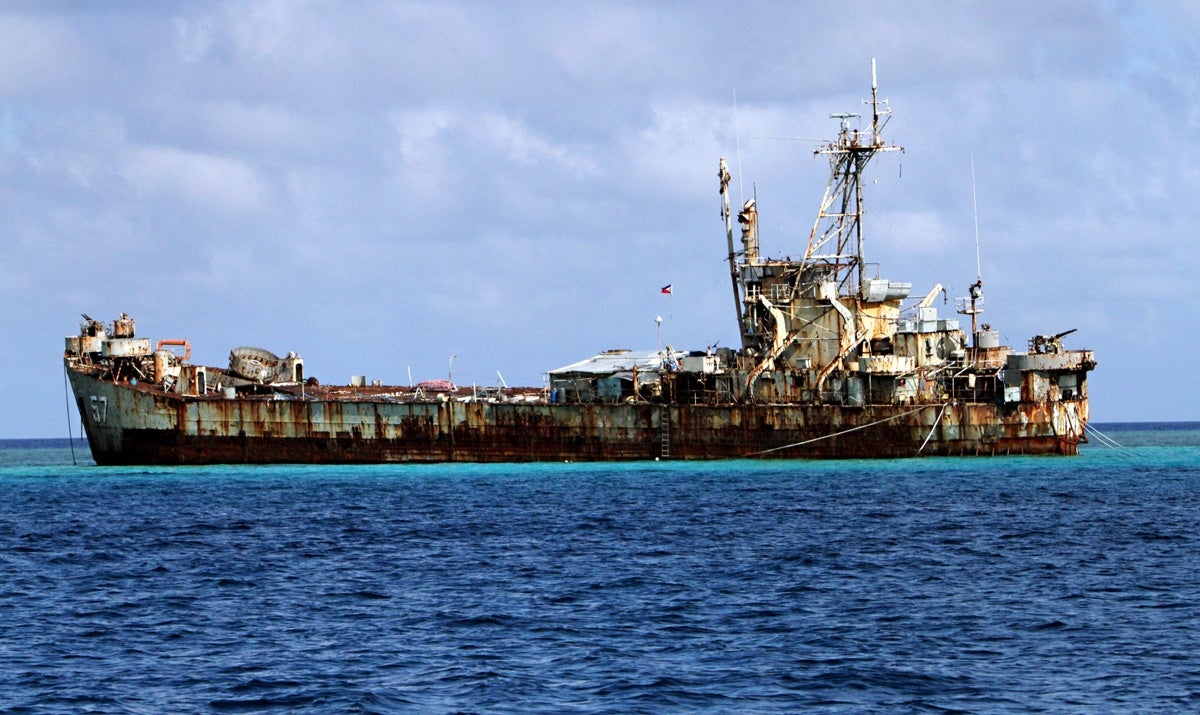 MANILA, Philippines — Defense Secretary Delfin Lorenzana on Thursday denied a Chinese foreign ministry spokesperson’s statement that the Philippines had made a commitment to remove the BRP Sierra Madre from Ayungin (Second Thomas) Shoal where it serves as a military outpost.

Lorenzana also threw back Beijing’s allegations of trespassing against Manila, saying that it was China’s coast guard vessels that intruded into Philippine waters not the two Filipino supply boats which were blasted with a water cannon by the Chinese ships to stop them from bringing food and other supplies to the Marine detachment at the outpost.

“As far as I know there is no such commitment,” Lorenzana told reporters. “That ship has been there since 1999. If there was commitment it would have been removed a long time ago.”

The shoal lies within the Philippines’ 370-kilometer exclusive economic zone (EEZ) over which the country has sovereign rights, he said.

“We can do whatever we want there and it is they who are actually trespassing,” Lorenzana said.

Del Rosario, who served from 2011 to 2016 under the late President Benigno Aquino III, said that the Philippines made no commitment to remove the ship.

At a press conference in Beijing on Wednesday, China’s Foreign Ministry spokesperson Zhao Lijian maintained that Ayungin, which is called “Ren’ai Jiao” by the Chinese, was part of Nansha Qundao, China’s name for the Spratlys chain in the South China Sea.

“China demands that the Philippine side honor its commitment and remove its grounded vessel on Ren’ai Jiao. This position remains unchanged,” Zhao said.

He did not say who made the commitment to remove the Sierra Madre and when.

Zhao said that China allowed the supply mission to reach the Sierra Madre on Tuesday in a “provisional, special arrangement out of humanitarian considerations.”

In reaction, Foreign Secretary Teodoro Locsin Jr. said on Twitter on Thursday that “anyone with a brain does not need to read anything more than what the President said.”

Locsin quoted Mr. Duterte saying: “The South China Sea is a strategic challenge that cannot be solved by force … We all pledge adherence to the rule of law, including the 1982 Unclos (United Nations Convention on the Law of the Sea).”

“Let us then walk our talk and move forward. Acta non verba. Deeds not words …. We abhor the recent event in the Ayungin Shoal and view with grave concern other similar developments. This does not speak well of the relations between our nations and our partnership … That is why China must remain committed to the early conclusion of an effective and substantive Code of Conduct in the South China Sea,” Locsin added, quoting the President.

Several senators also rejected the Chinese government’s demand to remove the rusted ship which is stuck on a reef at the shoal.

“China has no right to dictate what we can do within our waters,” Sen. Grace Poe said. “Its recent statement telling us to remove BRP Sierra Madre from the shoal is another display of utter arrogance and aggression that we must not take sitting down.”

Instead of withdrawing, the government should be refurbishing the Sierra Madre, according to Sen. Panfilo Lacson.

“If possible, we should even reinforce it with another vessel that is functioning,” Lacson said.Sen. Joel Villanueva said that China, as a trespasser, had no right to issue an eviction order.He said the ship was a fixture as immovable as the longest mountain range in the country for which it was named.

“Eventually, the sea will be BRP Sierra Madre’s final resting place. But no way should it be the graveyard of our sovereignty,” Villanueva said. Lorenzana said that when the motorboats Unaiza Mae 1 and Unaiza Mae 3 started to unload their cargo onto the Navy ship, three Chinese coast guard personnel on a rubber boat approached the Sierra Madre to take pictures and videos.

He told the Chinese Ambassador to the Philippines Huang Xilian that such actions were a form of “harassment and intimidation.”

After the supply run was blocked by the Chinese vessels last week, Malacañang said the Philippines would maintain its outpost at the shoal.

“No abandonment will happen. We will continue to do all we could and what we should to make sure the supplies reach our fellow Filipinos there,” said Cabinet Secretary Karlo Nograles, the acting presidential spokesperson.

The Sierra Madre, a World War II-era landing ship, is still a commissioned vessel of the Philippine Navy.

It was intentionally marooned at Ayungin, about 260 km west of Palawan’s Quezon town, after China occupied Panganiban (Mischief) Reef in 1995.

About 37 km farther west of Ayungin, Panganiban is still within the country’s EEZ but it is now one of China’s biggest artificial islands.

The Sierra Madre serves as an outpost for Filipino troops who defend the Philippines “against the illegal and oppressive incursions of Chinese forces in the West Philippine Sea,” Del Rosario said.

Its presence at the shoal is sanctioned by the Unclos and the July 2016 award from the international arbitral tribunal, which ruled to invalidate China’s sweeping claims to the South China Sea, including the West Philippine Sea, he said in a statement. China continues to ignore the ruling.

Following the Nov. 16 Ayungin incident, Locsin strongly conveyed Manila’s “outrage, condemnation and protest” to Beijing and demanded its ships to “back off.”

The US Department of State last week called the Chinese action an “escalation” that directly threatened peace and stability, and heightened tensions in the region, and infringed freedom of navigation in the South China Sea.

“The United States stands with our Philippine allies in upholding the rules-based international maritime order and reaffirms that an armed attack on Philippine public vessels in the South China Sea would invoke US mutual defense commitments under Article IV of the 1951 US-Philippines Mutual Defense Treaty,” it said. —WITH REPORTS FROM MELVIN GASCON AND TINA G. SANTOS