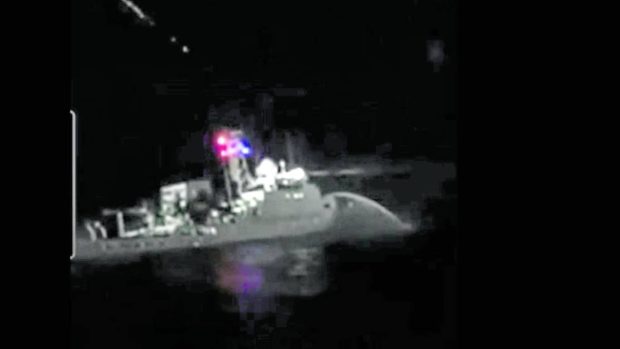 NIGHT ATTACK A blurry image from a cell phone camera of one of the crew members of a Filipino boat shows the Chinese Coast Guard ship that blasted them with a water cannon on Tuesday night to prevent them from bringing supplies to troops on the rusted BRP Sierra Madre, which serves as a Philippine outpost at Ayungin (Second Thomas) Shoal west of Palawan province. No one was injured in the attack. —VIDEO GRAB

Philippine supply boats, which were earlier “blocked and water cannoned” by China on their way to deliver supplies to Filipino troops on board the BRP Sierra Madre in Ayungin Shoal, were harassed again.

According to Defense Secretary Delfin Lorenzana, a Chinese Coast Guard ship in the vicinity sent a rubber boat carrying three persons near the BRP Sierra Madre and “took photos and videos” while supplies were being unloaded from the supply boats.

Nevertheless, the boats were able to complete their resupply mission, which was aborted last Tuesday, Nov. 16, when Chinese Coast Guard vessels blocked and fired water cannons at them when they approached the shoal.

Sense of the Senate

Sotto said he felt “irritated and sad” over the Nov. 16 incident, saying China should be “friendly” with its neighbors like the Philippines.

“They are supposed to be our neighbors. We should be friendly with our neighbors but what the Chinese Coast Guard is showing is that they do not have any regard for anything else except what they think is their property,” he added.

Sotto said it would be a “very good idea” to come up with a Senate resolution that would express the sense of the chamber to back up the sentiment of the DFA against the incident.

“I think we should come up with a sense of the Senate, it would probably back up the statements made by the DFA or the letters that they have sent them,” the Senate president said.