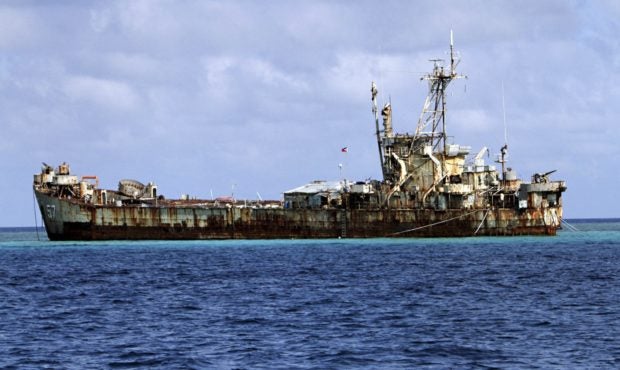 MANILA, Philippines — The Philippines will not abandon its outpost at Ayungin (Second Thomas) Shoal despite attempts by China to block food and other supplies for the military detachment deployed there, Malacañang said on Friday.

Also on Friday, the United States expressed firm support for the Philippines, its treaty ally, following the latest blockading incident in which a Chinese Coast Guard ship blasted with a water cannon two Filipino supply vessels headed to the shoal on Tuesday night, damaging one and forcing both to return to Palawan.

Foreign Secretary Teodoro Locsin Jr. had conveyed the government’s “outrage, condemnation and protest” to Beijing, asserted the country’s sovereign right over the shoal as part of the Philippine continental shelf and it’s exclusive economic zone, and demanded the Chinese ships to leave.

China on Thursday defended the attack against the supply boats, saying they “trespassed” in Chinese waters and that its coast guard only “performed official duties in accordance with law” and “upheld China’s territorial sovereignty and maritime order.”

Acting presidential spokesperson Karlo Nograles on Friday said the government would continue to assert its sovereign rights over the shoal and its other territories, backing the “swift actions” of the Department of Foreign Affairs.

“No abandonment will happen. We will continue to do all we could and what we should to make sure the supplies reach our fellow Filipinos there,” Nograles said at a press briefing.

Locsin had reminded China that the Filipino boats were “public vessels” covered by the Philippines-United States Mutual Defense Treaty.

Reacting to the Nov. 16 incident, the US Department of State on Friday called the Chinese action an “escalation that directly threatens regional peace and stability, escalates regional tensions, infringes upon freedom of navigation in the South China Sea as guaranteed under international law, and undermines the rules-based international order.”

“The United States stands with our Philippine allies in upholding the rules-based international maritime order and reaffirms that an armed attack on Philippine public vessels in the South China Sea would invoke US mutual defense commitments under Article IV of the 1951 US-Philippines Mutual Defense Treaty,” state department spokesperson Ned Price said.

The Filipino vessels, which had been making monthly supply runs to the detachment, were also bringing workers who were to make repairs on the BRP Sierra Madre, a World War II-era ship that was intentionally ran aground at Ayungin in 1999 to turn it into an outpost at the shoal, about 260 kilometers west of Palawan’s Quezon town.

A group of Philippine Marines are manning the rusted ship.

A senior military official told the Inquirer that civilian rather than naval vessels had been used to bring supplies to the detachment “just to ease the tension” between the Chinese and Filipino forces in the waters near the shoal.

Also, the smaller civilian boats could navigate the shoal’s shallow waters to reach the Sierra Madre. Supplies had also been dropped on the water close to the ship from military planes during a blockade.

He told CNN Philippines that after taking control of Panatag (Scarborough) Shoal in 2012, Beijing’s focus shifted to Ayungin Shoal and blockaded the outpost there in 2013 and 2014.

“They want to prevent the Philippines from maintaining that outpost and if they cannot interfere directly with say the Navy and Air Force, what they are trying to do now is to starve the outpost essentially so that they would be the ones to voluntarily leave,” he said.

In a separate interview with ANC, he said the Duterte administration did not take a strong stand against Chinese intrusion into Philippine waters.

“Now we have trouble pushing back, to recover, because we have allowed them to come so close, we have given them so much that they now don’t want to let go,” said Batongbacal, director of the Institute for Maritime Affairs and the Law of the Sea of the University of the Philippines.

Magdalo Rep. Manuel Cabochan on Friday said the government should “be more assertive in protecting our sovereignty.”

“It is obvious that China intends to force us out of our territory in the West Philippine Sea. We must not let this happen and defend what is ours according to international law,” Cabochan said.

Taguig-Pateros Rep. Alan Peter Cayetano, a former foreign secretary, said the issue should not be allowed to escalate.

The fishers group Pamalakaya, said the Chinese actions at Ayungin Shoal were the same type of bombardments that fishermen from Zambales, Pangasinan and Bataan had been subjected to by the Chinese to drive them away from Panatag Shoal’s rich fishing grounds, about 220 kilometers west of Masinloc, Zambales province.

This happened on Jan. 27, 2014, and again on April 9, 2015 when the Chinese Coast Guard repeatedly fired their water cannons at about 80 Filipino fishermen, said Pamalakaya chair Bobby Roldan. —WITH REPORTS FROM JULIE M. AURELIO, ROMAR MIRANDA AND JOANNA ROSE AGLIBOT

Read Next
Russia completes 10M Sputnik V vaccine delivery
EDITORS' PICK
Omicron variant detected in more countries as scientists race to find answers
Gov’t plans to open COVID-19 vaccination for 5- to 11-yr-olds by January 2022
A delightful blessing!
Villar Group gears up for AllValue Shopping Party on Dec. 3; around P 1-million promos and discounts up for grabs
Legarda: Ending Violence Against Women, a cause for all
Gov’t eyeing COVID-19 vaccine booster for essential workers, indigents by Dec. 10
MOST READ
Quiboloy warns of ‘much worse than Omicron virus’ if his ‘persecution’ is not stopped
Suspected Omicron cases mild, says leading S. Africa doctor
Bongbong Marcos’ conviction in tax case not a crime involving moral turpitude — lawyer
Marcoleta defends pol ads on ABS-CBN
Don't miss out on the latest news and information.