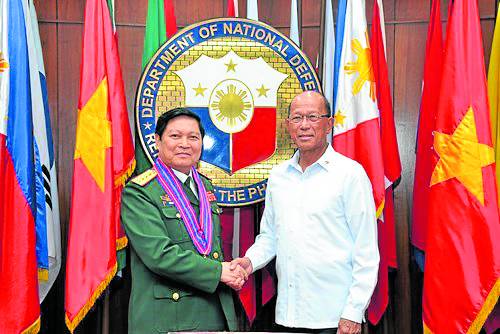 MANILA, Philippines — After 14 years, the Philippines and Vietnam have agreed to resume joint marine scientific research in the South China, according to the Department of Foreign Affairs (DFA).

The DFA announced the agreement after the recent ninth Philippines-Vietnam Joint Permanent Working Group on Maritime and Ocean Concerns (JPWG-MOC).

The two nations, both claimants in the disputed South China Sea, discussed various initiatives for cooperation in marine scientific research, marine environment protection and hydrometeorology during the meeting.

Both delegations also covered other issues, including coordination within regional and international fora, fisheries and maritime security cooperation, the DFA said.

The JPWG-MOC is the main platform for dialogue and coordination, practical cooperation and capacity-building activities among maritime agencies of the Philippines and Vietnam.

The JPWG-MOC is a specialized mechanism established under the Philippines-Viet Nam Joint Commission for Bilateral Cooperation.

Although historians trace Philippine-Vietnamese relations to pre-Hispanic times, official relations started only in 1976 because of the Vietnam War.

But bilateral relations have improved markedly, particularly in 2011 when Vietnamese President Truong Tan Sang made a state visit to the Philippines that resulted in four agreements in naval, coast guard and tourism concerns.

Lt. Gen. Andres Centino, who was then Army chief before being named chief of staff of the Armed Forces of the Philippines, discussed the matter with Vietnamese defense attaché Senior Col. Nguyen Van Son.

Part of the discussion focused on possible engagements with the Vietnam People’s Army PA to build the reserve corps and to enhance the two armies’ HADR capabilities.

The Army currently has defense and security engagements with over 20 countries worldwide.